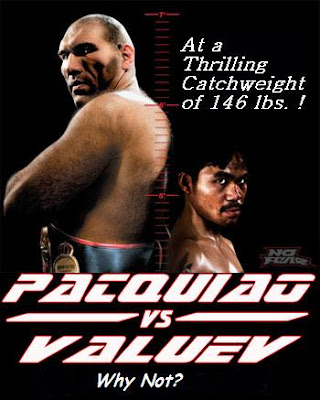 There, I said it. Pacquiao vs. Cotto is meaningless.

Now, before the loyal Pacquiao and Cotto fans, boxing’s most bullishly loyal fans ever, begin to throw garbage at the screen, let me clarify a few things.

There’s no doubt in my mind that this encounter will be exciting beyond belief, almost a sure candidate for Fight of the Year. Even the lead-in, with both fan bases going at it, will be amusing.

However, what purpose does this fight serve? Team Pacquiao has already said that they have no intention of campaigning at Welterweight and Cotto, should he win, will still have just a couple of decent fights available to him.

Nobody, other than the fighters’ bank accounts and those of their management, stand to really gain much from this showdown of two indisputably talented warriors and pound-for-pound stars.

But, after the dust settles on this contest, the biggest loser will be boxing itself as we will be trading in one exciting hour of Cotto vs. Pacquiao for the short-term well-being of two absolutely stacked divisions.

For Cotto, fighting Pacquiao may be a nice injection of cash into the wallet, but it really stops his ultimate goal of Welterweight dominance in its tracks.

Should Cotto win, he would get a boost in publicity but there will still be only two fights that would make sense before he retires: Cotto-Mosley 2 and Cotto-Mayweather. So, ultimately, other than a few headlines and a payday, he gets nothing from fighting Pacquiao.

But should Cotto lose, he would lose everything. His career would effectively be over as it would no longer make good business sense for either Mosley or Mayweather to fight him. He’d be clear second-tier fodder…and that’s if he even remained active.

Now, switching things up and looking at Manny, a win for him would be another notch on his belt and another huge payday, but it really earns him nothing else. He has no intention of campaigning as a Welterweight and a win would either force him into fighting foes with whom his team isn’t a hundred percent sure, like Mayweather and Mosley or into retirement.

On the other hand, a loss would take him out of the Celebrity Boxing circuit and force him into tougher bouts for less pay, which may be a good thing since the Jr. Welterweight division is starting to heat up with the rise of Victor Ortiz and bouts like Timothy Bradley-Nate Campbell, Junior Witter-Devon Alexander and Andreas Kotelnik-Amir Khan on the horizon. These rising stars need their lineal champion to take on the best amongst them and not to be looking for genetically engineered celebrity exhibitions.

Sports have to maintain a narrative voice in order to be truly special. The big contests have to mean something and, more importantly, they have to follow through on a story; They have to bring closure to a long series of battles.

The LA Lakers could’ve had a more exciting, more profitable series against the Boston Celtics, but they had to beat the Magic to be crowned champions. Anything else would’ve been false and anti-climatic.

Boxing also has its own narrative and should follow through on its own story lines if it wants to stay long-term relevant in a sporting world that is continually marginalizing it.

To go the “Celebrity Boxing” route, as Nate Campbell called it, is a disservice to the sport and it’s future. It shows a complete disdain for the natural order of things and it creates a permanent upper class where a handful of big names fight one another for big bucks while freezing the rest of the fighters out and refusing to allow any torches to get passed to the younger fighters.

Freddie Roach expressed this point of view in a recent interview from maxboxing: “Titles don’t really matter anymore. Its match-ups.”

And that’s fine and dandy for the one percent of fighters who can be considered “big enough” to sell a million PPVs, but what about the young prospects and the prime boxers still looking to grow? Unless a guy like Pacquiao or Mayweather is willing to fight once every three weeks to appease the fans, they are essentially creating a sport outside of the mainstream structure of the actual sport and further removing the fans from the game.

Boxing needs its biggest stars and it needs them to take an active part within their own divisions. It needs these stars to dominate in their prime, go to war when they’re slightly past their prime and to pass the torch when they simply can’t go on. That’s the natural order of things in boxing and that’s how the future stars of the sport are made.

Divvying up mega-paydays among a small group of fighters in cherry-picked contests and retiring when no more cash fits into your Brinks truck, is not in the best interest of the sport.