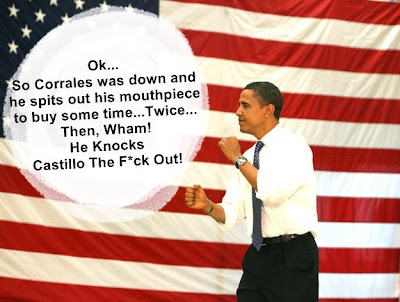 We’ve already explored the topic of Britain’s and Puerto Rico’s best. In the works are features on the best Filipino and Mexican fighters.

However, on this July 4th, it’s only fitting to write about America’s best active fighters.

So, grill another burger and open another cold one while we delve into the topic of who, exactly, are America’s Finest:

10) Steve Cunningham- This former Cruiserweight champ with quick hands and sharp reflexes would still be sporting the bragging rights of being “The World’s Best Cruiser” if not for, literally, four or five punches from Tomasz Adamek last year. Cunningham is working his way back to a rematch and wants nothing more than to avenge this tough loss.

9) Andre Berto- The reigning WBC Welterweight titlist gets little respect in the media, but he was good enough to beat a very tough Luis Collazo as well as a large handful of tough contenders ranging from Jr. Welter slugger, Juan Urango, to tough ex-champ, Cosme Rivera.

8.) Nate Campbell- The Galaxxy Warrior shocked the world last year by beating up and out-classing the highly-regarded Juan Diaz. He followed that up with a gutsy win over the awkward and talented, Ali Funeka. At 37 years of age, there aren’t too many more fights in Campbell’s reserves, but he’ll have the chance at another career-defining bout against Timothy Bradley in August.

7) Kelly Pavlik- While still no.1 at Middleweight, Pavlik’s star has fallen considerably following his embarrassing loss to Bernard Hopkins and the recent postponement of his fight with Sergio Mora. However, Pavlik is still the iron-fisted slugger who beat Jermain Taylor and Edison Miranda into submission and turned the tough Marco Antonio Rubio into a a mid-fight pacifist.

6) Timothy Bradley- Bradley is the man at Jr. Welterweight, whether Ring Magazine says so or not. He went over to the UK to take the title from the awkward Junior Witter, completely dismantled veteran Edner Cherry, and beat fellow 140 lb. champ, Kendall Holt, in a thriller. Now, on August 1st, he takes on former unified Lightweight champ, Nate Campbell, in another tough and dangerous fight to add to the case for making him no. 1 at 140.

5) Chad Dawson- Forget the fact that he had a couple of dull fights with Antonio Tarver and consider the fact that he just beat Tarver twice…decisively. In addition to the Tarver fights, Dawson also holds exciting wins over Eric Harding, Tomasz Adamek, and Glen Johnson. The rematch of the controversial Johnson fight has been signed to once and for all prove that Dawson indeed deserved the nod.

4) Bernard Hopkins- Coming off his schooling of Kelly Pavlik, B-Hop is looking for just the right fight with which to close out a spectacular career. Whoever he fights last needs to be aware that they are fighting one of the smartest, toughest men in the game and that they are in for a very long night. If Hopkins doesn’t make it into the Hall of Fame as soon as he’s eligible, they should just close the place down.

3) Shane Mosley- With wins over Antonio Margarito, Ricardo Mayorga and Luis Collazo as well as a close contest with Miguel Cotto, Mosley has re-established his claim as one of the few active fighters who could be tagged with the “Legend” label. He has been in hot pursuit of a bout with Manny Pacquiao, but that looks unlikely to happen.

2) Paul Williams- Williams has been given the nickname of “The Most Feared Man in Boxing” and it’s hard to dispute. Most of the big names from 147 up to 160 simply refuse to even mention his name. Being an unusually tall and freakishly active southpaw has a lot to do with it…victories over Antonio Margarito and easy wins over tough veterans like Carlos Quintana, Verno Phillips and Winky Wright may also be a big factor in the fact that Williams’ phone isn’t ringing off the hook with fight offers.

1) Floyd Mayweather Jr.- Mayweather gets the top spot before he even officially makes his return from a 20 month “retirement.” Mayweather may be the most gifted fighter of this generation and is doubly-blessed with one of the sharpest boxing minds in the sport. While getting gang-hated for having the nerve to talk about business decisions in boxing interviews, few can doubt that Mayweather is one awesome fighter.

* Andre Ward- Olympic Gold Medalist who just outclassed Edison Miranda. He just may be the next big, American star.

* Andre Dirrell- In the same Super Middleweight division as Ward, Dirrell has a better resume at this point and has all the tools to beat anyone in and around the division.

* Rocky Juarez- No longer a prospect, but definitely someone with the skill and one-punch power to shock the world. He’s blamed his recent tentative performances on an eye injury…He’s a hundred percent healthy now…

* Chris Arreola- Arreola has two things lacking in the current crop of American Heavyweights: Massive power in either fist and the will to push ahead when things get rough.

* Daniel Jacobs- Still a baby in the sport, but few prospects have displayed the maturity and technique that Jacobs has shown so far against limited opposition.

So, there you have it! Cheer up America and light another bottle rocket. The world may be producing some great talents these days, but The USA is still capable of holding its own…