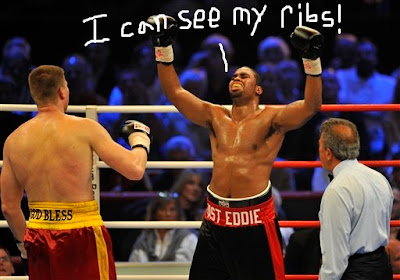 In a sterile German boxing arena, on The Fourth of July and with the total and complete indifference of his countrymen, Eddie Chambers was to be sacrificed to the next upcoming Eastern Block Heavyweight sensation, Alexander “Sasha” Dimitrenko in a WBO Title Eliminator.

It was to be a career-builder for the 27-year old Ukraine, 6’7″, 253 lb. beast against a much smaller American who had come up short against Alexander Povetkin, the last time he fought an Eastern European prospect in Germany.

Unfortunately for Team Dimitrenko, somebody forgot to inform Chambers that he would be playing the role of cannon fodder.

The American underdog practically strutted to the ring with the look of someone who knew something the rest of the world would soon find out.

Chambers had obviously taken his training seriously, coming into the bout weighing 208 lbs, his lightest since 2003.

As the fight began, you could clearly notice the usual rolls around Chamber’s mid-section were gone and he just looked lighter, quicker on his feet.

Dimitrenko took the first three or four rounds with black and white offense and sticking out a long jab a la Wladimir Klitschko.

Chambers, while not absorbing punishment, was obviously jockeying for position and working out a way to deal with the jab of a fighter six inches taller and 45 pounds heavier than him. He swatted hard at Dimitrenko’s outstretched left arm and, in doing so, didn’t allow Dimitrenko to use it as a way to keep distance.

Around the fifth round, Chambers found his rhythm and began working his way inside Dimitrenko’s long reach and registering some major damage with solid body work and a wicked uppercut.

By the seventh, it was clear that Dimtrenko had bitten off a little more than he could chew and was being worn down by the American. Chambers was given credit for a knockdown in seventh, after a body blow that Dimitrenko insisted was a kidney shot.

The rest of the fight was a Chambers highlight reel with him picking the prospect apart and establishing his place among the Heavyweight elite.

Chambers scored another knockdown in the 10th with a wicked left/right combination that sent Dimitrenko’s mouthpiece flying.

The last two round were characterized by Dimtrenko trying to rally with aggressive surges, but all of them ending with Chambers firing back and forcing the aggressor back into the ropes.

With this victory comes the opportunity to fight Wladimir Klitschko for the WBO World Heavyweight Title and, also, the chance to finally bring a piece of the heavyweight title scene back to the United States.

It’s just too bad that the American media, American boxing pundits and even the American fight fan couldn’t be bothered to show the least bit of interest.