Fighter of the Month-

Marcos Maidana: He was being brought in as a stepping stone for Golden Boy’s Victor Ortiz, one small obstacle on Ortiz’s path to stardom. The Interim WBA 140 lb belt practically had Ortiz’s name on it already and the 8,000 plus fans who came to the Staples Center were mostly coming to see the new phenom who would carry the Golden Boy banner into the future. 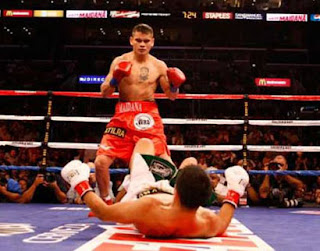 It would’ve been so easy for Maidana to give up. There were several opportunities for the tough Argentinan to take the payday, relish the memories and go back home.

The hard knockdown in the first gave Maidana his first chance to quit, but he came back strong and ended up knocking Ortiz down in the same round.

Two knockdowns in the second surely would signal the end. After all, he had already shown his toughness by surviving a tough first round and leveling Ortiz. But Maidana fought on and survived the round.

Then, while still absorbing punishment from the heavy-handed Ortiz, he fought on, grinding down Ortiz until he was able to seriously stun him at the end of the 5th.

Beaten down and demoralized, Ortiz was pushed around the ring by the aggressive Maidana in the 6th until he got knocked to the canvas. When Ortiz got up, he clearly wanted no part of Maidana and waved off the fight before the referee did the same, officially because of the cut that Ortiz had sustained.

For defying the odds and snatching the glory during another fighter’s coming out party, Marcos Maidana is The BTBC’s Fighter of the Month.

Bum of the Month-

Ruslan Chagaev: Now, imagine the exact opposite of Marcos Maidana. 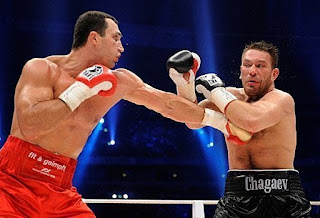 other sources. He was coming in as a replacement when David Haye pulled out of the fight and was thought to be a tough test for Heavyweight champ, Wladimir Klitschko.

Chagaev walked into Klitschko’s home turf, among 60,000 fight fans, and promptly rolled over without even the slightest hint of defiance.

From the very beginning, Klitschko used his outstretched arm to mark the distance at which he wanted Chagaev to stay…and Chagaev dutifully obeyed, staying at the perfect distance for Wlad and offering no desire to work his way inside.

Chagaev sustained a beating for 9 one-sided rounds until a cut over his eye forced his corner to throw in the towel.

For entering a ring with absolutely no desire to win the fight, Ruslan Chagaev is our Bum of the Month.

The BTBC Thread of the Month-

Pacquiao okays Cotto as next foe

This was a debate involving Pacquiao, Cotto and Mayweather; Plus, Pacquiao’s proper ranking at 140 lbs. How could this one not generate heated debate?