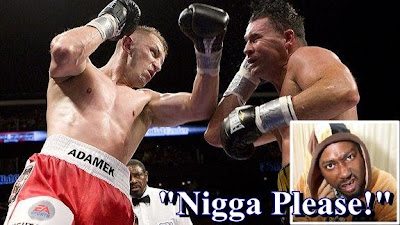 After one of the biggest title mismatches in the history of the Cruiserweight division, one question remains regarding the Tomasz Adamek-Bobby Gunn bout on Saturday: Why?

Why did the IBF see fit to sanction this farce as a World Title bout? Why Bobby Gunn? Why has Gunn, a D- club fighter, received two shots at a Cruiserweight title (The other being a one round blow-out loss to Enzo Maccarinelli)? Why did Tomasz Adamek choose to tarnish an otherwise stellar reign with this garbage? Why did people pay hard-earned money to buy tickets or order the fight via online PPV?

What’s gospel, though, is that this human sacrifice was peddled to the public as a World Title defense when there are literally dozens of fighters more deserving than Gunn, even as tune-up defenses.

Brothers and Sisters, security camera footage of senior citizens being mugged would’ve been less of a mismatch than what I saw on Saturday.