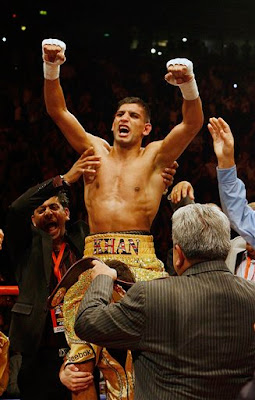 After decisively capturing his first world title, the WBA Junior Welterweight championship from Andreas Kotelnik, Khan has earned a few days off and a few days of partying.

However, beating a solid, but predictable Kotelnik was the easy part. The hard part is going to be keeping that title in a 140 lb. division that is absolutely stacked with quality fighters in a wide array of styles and levels of experience.

Looming on the horizon first are his #1 mandatory challenger, Dmitriy Salita, and the WBA Interim Jr. Welterweight Champ, fresh from his destruction of Victor Ortiz, Marcos Maidana.

Both Salita and Maidana are young and hungry pressure fighters who will jump on Khan from the opening bell and won’t back down unless the likeable 22-year-old champion backs them down. Salita and Maidana will require a mental toughness and focus from Khan that he has yet to display in his professional career. Neither fight is an easy win.

It’s precisely for this reason that Khan’s promoter, Frank Warren, is trying to stir the pot and find a way to get around those tough fights.

It’ll be a tough sell for Warren to avoid the mandatory with Salita without making some sort of huge “step-aside” payout to the Orthodox Jew brawler from Brooklyn. And even with step-aside money, it seems a little far-fetched that Salita would voluntarily walk away from a world title bout and a lucrative payday against a champion that many feel is very vulnerable.

But maybe Warren is counting on the WBA continuing its efforts to become the 90’s WBO of the 21st century, running interference for a few preferred champions and rigging the ranking as to allow a steady supply of hapless club-level fighters as #1 challengers.

And, of course, let’s not even mention current lineal champ at 140 lbs., Manny Pacquiao.

So, now that Khan has taken the plunge on to the world arena by capturing a world title, the learning curve normally allowed for a 22-year-old fighter is out the window. Fans don’t want to hear about a champion learning on the job, just ask Andre Berto.

With nowhere to slack off and a division full of class fighters, Khan will have take care of things the old-fashioned way: Fight his way through the best.

For his sake, I hope he’s ready.