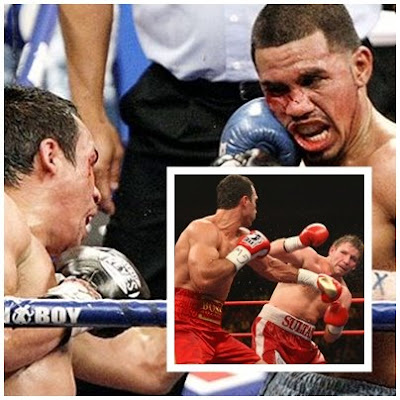 When was the last time you witnessed a nail-biting heavyweight contest for a world title with the pendulum is swinging every way possible like in a Rocky film?

Holyfield-Tyson or Bowe-Holyfield? Exactly about a decade ago. I hope everybody has figured out that the heavyweight division is crap. I would advise some fans to take a nightcap and a hot water bottle with them for the next Klitschko fight. Yahoo’s Kevin Iole ranks this current era as the worst in heavyweight history. You could argue that Valuev, Wladmir and Vitali could use their size to beat past heavyweight champions, but if a 46 year-old Evander Holyfield gets robbed of a decision I think a prime Joe Frazier could blow them all out in a couple of rounds. Another undisputable statement is that the big guys are boring. More boring than watching paint dry. More boring than queuing. We’re talking very boring here.

One of the first rules in boxing is that a jab must start every boxer’s offense. But if that’s where the offense ends, the nightcap will be out sooner than expected. Wladmir does throw a lot of right hands, occasional left hooks, and if your very lucky you might be treated to an uppercut once in a while. His fly-swatting technique against Sultan Ibragimov was unique. These days that’s heavyweight “action”. Watching a six foot six Ukrainian smashing the CompuBox records with the robotic arm technique and throwing jabs and occasional hooks. I also don’t remember a lean heavyweight competing for a title. Eddie Chambers has lost a lot of weight and will probably weight in 210 against Wladmir, who’s always in good condition. Fighters feel they have to weight in heavier against bigger men but they lose mobility, agility and speed, which is something that could trouble the larger heavyweights. Every heavyweight title bout this year, bar the Klitschko’s have entered the ring without extra trimmings on the side.

The pound-4-pound rankings confirm this. As the great Steve Bunce said on primetime television “Pound-4-Pound rankings are like a***holes, but some stink more than others.” Wladmir Klitschko might creep into a couple of rankings but the rest of the heavyweights are miles behind. I know that they’re not accurately correct but it’s a disgrace for the division to have so much coverage and funding and to have only one fringe contender.

There are always two sides to a story. The fighters who are bagging all the praise are the little men. They entered the ring weighing approximately the same as Chris Arreola’s left breast but Juan Manuel Marquez and Juan Diaz kicked off the year with a bang in a thrilling contest with the fighters involved in back and forth action. They don’t show up out of shape, and only throw a jab and an occasional hook as a combination. No. It was pulsating action with the younger, veteran counter-puncher Juan Manuel Marquez out-witting the younger more aggressive Juan Diaz. It took time for Marquez to work the “Baby Bull” out but the veteran stopped Diaz in the ninth round. The thing is they get more praise but a lot less money than a heavyweight. Sultan Ibragimov has retired this week after one big heavyweight fight. It’s enough to be a healthy pension for him and his family.

Another contender for fight of the year is Bernard Dunne vs. Ricardo Codroba. This is the kind of burning desire that’s severely lacking from the heavyweight division. Both fighters showed true heart and a will to win unlike anything in any other sports. Dunne was down twice in the fifth round. Memories of his 86 second defeat to Kiko Martinez were flowing through his head. The crowd were all waiting for the referee to step in to stop the fight. But the one guy that who hadn’t been convinced was the Irishman. He stayed with Codroba until his opponent was out on his feet and stopped him in the eleventh to capture his first world title. He might have been behind on the scorecards but he showed guts to come back and stop the Panamanian.

The most frustrating thing about the heavyweight division is that there has been a glimpse of the heart that was shown in the Dunne-Codroba fight. Wladmir had to come off the canvas three times against Sam Peter, to win a decision. Vitali didn’t stop slugging against Lennox Lewis even if his face looked like it been involved in a car crash. They can entertain and put on a show. But like the world’s better heavyweights (“better” being a more accurate term than “good”) they choose not to. They concentrate too much on tactics and about their faces. Maybe this is the reason that the brothers rule the roost. They show heart where others don’t. Tony Thompson was supposed to be a decent challenge for Wladmir but his heart wasn’t there on the night and he was stopped in the eleventh and went home with a healthy pay-check.

Maybe David Haye will be the start of something new, a more exciting heavyweight era as we move ever closer to 2010. But could we see a safety first, bigger heavyweight outpoint the mouthy Brit and continue the poor level in this era to the next? Boxing’s economy suffers badly with the lack of heavyweight entertainment and you could argue that it drives fans away towards MMA and WWE but I’ll save that until another rainy day.

At least we have the little men. From welterweight down, boxing is as entertaining as it has ever been. Laptops, mobile phones and iPod’s just keep getting smaller. It’s a small world after all and in boxing the little guys are proving the entertainers. The big guys give us more of a reason to watch the little men instead!

Discuss This Topic on The BTBC Message Board!