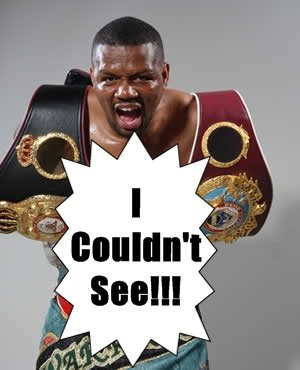 There’s nothing worse for a boxer than being on the wrong side of a hometown decision. Just ask Emanuel Augustus. The journeyman has grown a cult following because he’s been on the wrong side of many hometown decisions more often than the number of stitches Chris John received after being head-butted for several rounds against Hiroyuki Enoki. He’s frequently the unhappy beneficiary of terrible decisions none worse than his split-decision defeat to Courtney Burton.

At the end of the fourth round, Augustus landed two clean body blows sending Burton to his knees. But referee Dan Kelley had other ideas. He judged that Augustus’ punches were low and gave Burton a five minute rest. Augustus’ confidence was sky high as the underwhelming underdog was comfortably in front, though he frequently punctuated his success with showboating and constant taunting. He might have pranced around the ring like a batty but what followed could be one of the worst decisions witnessed on television. Every time Augustus clinched he was warned for a clash of heads. Referee Dan Kelly was searching for reasons to penalize Augustus but he couldn’t find any. He was warning him for imagined fouls. Then referee Dan Kelly inexplicably deducted a point from Augustus for spinning away from a clinch. Despite the point deduction, Augustus continued to outbox Burton and looked like he was going to win an easy decision.

The scores were announced. 98-94 to Augustus. Sounded fair enough. 97-92 to Burton. One judge might have perceived a fight differently. 99-90 to ….. Burton!? Was he serious!? 9 rounds to 1 to Burton! The Michigan Athletic Control Board received hundreds of hate mail from angry fans. The ESPN broadcast team went crazy. The time when Teddy Atlas had to correct a commissioner on live TV is unforgettable.

Last Saturday, Timothy Bradley met Nate Campbell for Bradley’s WBO belt at the Agua Caliente Casino in Bradley’s backyard. At the end of the third round, Nate Campbell complained that he couldn’t see due to a cut over his left eye that resulted from an accidental head-butt. After the head-butt, Bradley followed up with a barrage of power punches as Campbell argued with referee David Mendoza.

The doctor stopped the bout and they announced Bradley the winner via TKO. The unified rules state that any fight that’s stopped because a fighter cannot continue due to an accidental illegal shot that caused an injury is declared a no decision. David Mendoza was perfectly placed to see that the cut was caused by a head-butt. After the stoppage Mendoza issued his side of the story. He claimed that both fighters were head-butting and that he didn’t see blood straight after the head-butt only after Bradley threw a combination. On the replay it didn’t seem that Bradley had landed a punch near the cut.

It’s no wonder boxing fans get annoyed with bad officials. If officials don’t understand how to score or how to referee, they shouldn’t be thrown in at the deep end in a title fight. It leaves fans questioning if they could have done a better job than a qualified official. Then it leaves the, what if’s? What if Augustus would have had the decision over Courtney Burton? Would he still have as many followers? Would he have put himself in contention for a title eliminator? What if Mendoza would have given the fight a no decision? Would Bradley be ordered to a rematch by the WBO?

As boxing is judged to be a ‘dying sport’ this might be one of the reasons that’s driving fans away from the sport. Boxing needs to become more aware of these problems and solve them quickly if it wants to survive against expanding combat sports such as MMA. A national commission might solve the problem but nobody seems interested to make the first move.

The quicker we can get rid of the Mendoza’s from the sport the more fan friendly the sport will become.