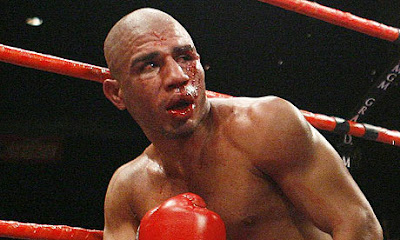 I’ve been racking my brain to remember a time when a defending world champion with as much credibility as Miguel Cotto has been treated so dismissively by his opponents, the sanctioning body he represents and the very promoter who is supposed to have his best interests in mind.

The disrespect tossed at Cotto has been a lesson for all those “good soldiers” in the sport who tow the company line and keep their mouths shut.

As everyone knows, Margarito was found to be wearing hand wraps coated with a “plaster-like” substance prior to his bout with Shane Mosley. When people put two and two together many put a big question mark over all of Margarito’s wins, most notably his brutal destruction of Miguel Cotto and the grotesque manner in which he battered Cotto’s face.

Top Rank honcho and alleged member of Team Cotto, Bob Arum, spent most of the “Plaster Gate” scandal defending Margarito and denying the loaded wrap claims…at the expense of the feelings of probable victim, Miguel Cotto.

Cotto sat back and remained the strong silent type, only occasionally giving voice to the anger he felt inside for the possible cheat and the frustration of having his own promoter defend the fighter who may have, literally, stolen millions from him when his loss ruined the chance of a showdown with Oscar De la Hoya.

Then, after suffering a beating that may have been caused by an illegal substance and having his promoter turn his back on him, Manny Pacquiao jumps in and claims the glory that could very well have been his by knocking off Oscar.

Cotto is forced into a nothing fight with Michael Jennings and a tough battle with Joshua Clottey for a fraction of the pay he would’ve received from a De la Hoya bout.

All this leads to an eventual big money showdown with Manny Pacquiao where despite being the reigning champ, he is forced to give in to every one of Pacquiao’s demands, including an arbitrary 145 lb. limit.

While the blame for this weak negotiating falls squarely on Team Cotto, it should be pointed out that the intermediary, Arum, never once lifted a finger to argue on Cotto’s side of the table…despite having just lured Cotto to a two-year extension on his Top Rank contract.

Now, the latest indignity for Cotto is that he’s being told to either put up his WBO Welterweight title for the Pacquiao fight or be forced to vacate.

Cotto’s take on this and, in my opinion, the correct one, is that since a world Welterweight title is fought between 140 and 147, it is against the organization’s rules to be forced to fight at an arbitrary catchweight for the title.

The WBO, of course, cares little about fair play and professionalism and decided to counter Cotto’s correct assertion by making Pacquiao their number one contender at 147 despite only one win at Welter, against an unranked De la Hoya.

Like it or not, Cotto will put up his hard-earned title and, without a doubt, it should be made clear that he’s being forced to. If Cotto balks, he will find himself without the title and it will be Pacquiao’s to win, anyway.

How’s that for respectful treatment of a veteran champion?

Beaten with illegal wraps, Your cheating conqueror defended by your own promoter, your promotional company allowing you to be raped in negotiations and the sanctioning body you represent forcing you to ignore their own bylaws and put the belt on the line…Geesh!

It’s no wonder guys like De la Hoya and Mayweather opted to be on their own as soon as they reached the top…there’s just no loyalty among thieves.

The best revenge for Cotto is to come into the Pacquiao fight, saddled with every possible psychological disadvantage, and stop the insanity right then and there with a big win…but, even then, he has to contend with the officials, who are always up for a good screw job, especially if it’s in favor of a fighter “about to make history” with seven titles in seven weight divisions.