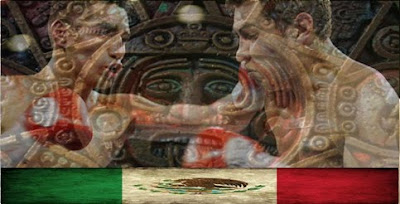 Welcome to the first Mexican Beat Report, a monthly wrap-up of the fight scene in Mexico.

The month of September is always a huge month for Mexican boxing, with many cards scheduled for dates in and around Independence Day (September 15th-16th).

There were mixed results from two prominant Mexican fighters in Panama on Saturday.

On the same card, for the WBA Interim Flyweight Title, hometown boy, Luis “El Nica” Concepcion (18-1, 13 KOs) beat Mexican Omar Salado (21-2-2, 12 KOs) via TKO when Salado’s corner waved off the fight in the 12th. Despite losing each round on this reporter’s scorecard, Salado was game the whole night, but was hampered by two deep cuts over his left eye and swelling around both eyes.

From contacts who frequent the Romanza Gym in Mexico City, Juan Manuel Marquez is walking around right now at about the Welterweight limit of 147 and has been absolutely brutal on his sparring partners in preparation for his September 19th clash with Juan Manuel Marquez.
Trainer Nacho Beristain is focused on targeting Mayweather’s body and, based on inside sources, don’t be surprised if Marquez switches over to southpaw at some point in their bout. Beristain and Marquez are doing lefty drills in sparring and on the mits.

The Jalisco-based Welterweight recently won the WBC Youth World Welterweight Title to go along with his NABF Welterweight strap and has issued public challenges via ring mic after his last several bouts. Alvarez will be fighting in Puebla, Puebla against Carlos Herrera (21-1, 8 KOs) on the same card that will see Edgar Sosa (36-5, 20 KOs) defend his WBC Jr. Flyweight Title against Puerto Rican, Omar Soto (14-3-1, 6 KOs)

September 11th will feature a bout for the vacant Mexican Flyweight Title pitting Alejandro Hernandez (22-6, 11 KOs) against Wilbert Uicab (25-5-1, 16 KOs). The fight will be held at the Salon Marbet Plus in Ciudad Nezahualcoyotl in the state of Mexico.
On September 12th, Monterrey, Nuevo Leon, plays host to a rematch of Venezuelan Nehomar Cermeno (17-o, 10 KOs) against Cristian Mijares (36-5-2, 15 KOs)
There will be a huge Independence Day card on September 15th in Leon, Guanajuato:
Jorge “El Travieso” Arce (52-5-1, 40 KOs) fights for the vacant IBF Flyweight title against South African, Simphiwe Nongqayi (15-0, 6 KOs); WBC Super Featherweight Champ, Humberto Soto (48-7-2, 31 KOs) will defend his crown against Colombian Aristides Perez (15-0-1, 8 KOs); Ulises Solis (28-2-2, 20 KOs), coming off his title loss to Brian Viloria, takes on journeyman, Gilberto Keb Baas (28-20-3, 16 KOs); Omar Chavez (17-0-1, 13 KOs), after his tragic win over the late Marco Nazareth in July, will fight Tennessee journeyman, Jessie Davis (11-14, 8 KOs) in a six round Welterweight bout.
Gutsy Featherweight Tomas “El Norteno” Villa (20-6-4, 13 KOs) has signed a promotional deal with Gary Shaw Productions.
Israel Vazquez (43-4, 31 KOs) is back in training for his October 10th comeback bout against Al Seeger (28-4, 22 KOs) at the Nokia Theater in Los Angeles, California. Should he win, Vazquez has hinted at a desire to fight Rafael Marquez in a part 4.
To all of our Mexican friends and fans, Happy Independence Day… ¡Viva Mexico!