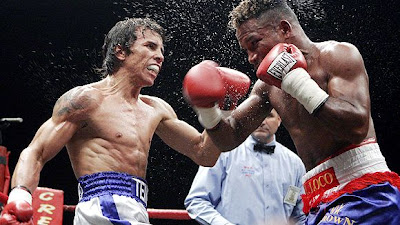 Everybody is getting excited about Edwin Valero and, on the Cotto-Pacquiao undercard, he’ll face his biggest test.

He has been doing the right thing, knocking out everybody who has been put in front of him, but Humberto Soto is the first real test he will come up against on world level.

Matchmaker’s dream at 130 lbs 12 months ago, will happen at 135 lbs come November 14. Soto might not be known to many fans outside of the US and Mexico but he’s a decent enough fighter. We have seen him give Joan Guzman some problems, I thought he might even have done enough to win against Kevin Kelley – and is not short of quality, or tenacity.

I’ve got to be honest and say I haven’t seen much of Soto, but his disposal of Benoit Gaudet was impressive. Valero, on the other hand, is a name that sparks every hardcore fan into a rant. He’s like marmite, you either love him or hate him. He’s a warrior. That’s enough to get people excited about ‘Dinamita’ in itself and twenty-five KO’s isn’t bad either.

I have heard a mixed bag of responses about Valero; some people say he will be the next big thing, the next Pacquiao. Most people say they want to see him under pressure in a fight before they can make a judgement. That is what makes this so interesting.

And there couldn’t be a better time for a young, lightweight to really make an impact. As the stars of yesterday fade away, and the depth of the division suddenly declining, Valero has the perfect opportunity to make his mark on world boxing. As the WBC beltholder his WBA competitor is Paulus Moses, a 31 year-old unbeaten Namibian, who is searching for a fight with Rolando Reyes in the States.

Also with Juan Manuel Marquez moving up to welterweight to fight former pound-4-pound king Floyd Mayweather Jr. next Saturday, it will leave a gigantic void at the top of the lightweight tree. Also, with Joan Guzman recently being snapped up by Golden Boy could he make the move up north to the blue-ribboned junior lightweight?

That means a huge space to fill in the division, so what better time for Valero to show he is more than just a guy who knocks out mediocre opposition? Mind you, he has only boxed 51 rounds in 25 fights, so maybe there is more to him already.

How will he respond when he is not steaming through guys, but when someone is hitting him back and catching him on the chin time and time again? Although he is a quiet underrated fighter, Soto might just be able to do that. Valero was hurt against Vicente Mosquera when he was dropped in the 3rd round of their super featherweight clash in 2006.

You have to admire him for taking this fight, though. It’s for the WBC lightweight title and with a big money bout with Manny Pacquiao on the horizon, is this really the kind of contest Valero needs on the undercard of arguably the greatest match-up of the decade?

Valero might be a rough diamond, but he not only showed raw power against Antonio Pitalua last April, he showed that he wasn’t scared of brawling with an agressive fighter such as Pitalua. Pitalua might not be world-class, but he got disposed like he was a club fighter, vulnerable and a sitting target, when Pitalua was far from it. Soto, though, will prove a sterner test. A quality fighter that has peaked late and will look to avenge on early career slip-ups to land that one big payday. Competitive match-up that could depend on how the fighters turn up on the night.

What do YOU make of Edwin Valero? Will he upstage Pacquiao? And how far can he go?

Answer on our forum: http://www.btbc.proboards.com/