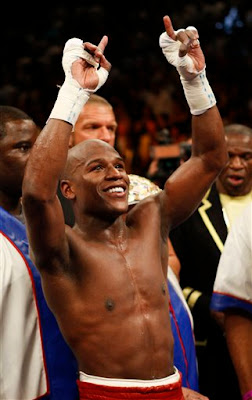 The recent confirmation that last Saturday’s Floyd Mayweather-Juan Manuel Marquez pay per view reached one million buys once again proves that the five hundred monthly “Boxing is Dead” articles that originate from MMA websites and ignorant members of the mainstream press are way off base.
Dana White, the figurehead of the UFC and one of the principal causes of the bitter rift between many boxing fans and MMA aficionados, was telling every available microphone that nobody wanted to see Mayweather and that the boxing show was an event that “nobody asked for” featuring Mayweather against a “what’s his name.”
Now, after seeing the end result of the first ever UFC vs. Boxing face to face ppv war, the boastful anti-boxing stories should be rewritten and boxing’s obituary should be shoved back into the top shelf of the desk, next to the silly, “whose fighters would win?” debate.
The fact of the matter is that boxing outsold UFC 103 by more than 2 to 1 with a main event that many were openly criticizing and “the theater option” which provided a cheaper alternative to the hefty ppv cost.
Of course, none of this absolves boxing of its sins or excuses the often archaic nature of its business policies. Boxing still has to do some serious house cleaning and is in dire need of reform in everything from the sanctioning bodies to its subservient relationship to the TV networks.
But, what September 19th proved was that America, still, when given a choice, chooses to believe in boxing and, overall, prefers it over any other combat sport option. The key is to simply make an honest effort to put on a good show.
Let this serve as a lesson to Dana White and his posse of true believers: Boxing is not dead.

Let this also serve as a lesson to the boxing hierarchy of power: People want to support your sport; They want to be won over…They want to believe.

Let’s hope the fans have indeed been heard.