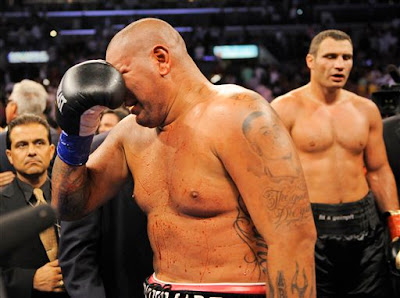 by Paul Magno
I guess enough time has passed so that what I’m about to say doesn’t come off as a heartless attack on a good guy who tried his best in a championship fight.
But, Chris Arreola’s shut-out loss to Vitali Klitschko was all his own fault.
As the likable Mexican-American heavyweight openly wept after the 10th round stoppage on Saturday night, I couldn’t help but think back to a certain speech trainer Teddy Atlas gave to the sluggish Michael Moorer between rounds of his championship-winning bout with Evander Holyfield :
“You’re lying to yourself. You’re gonna cry tomorrow because of this. Do you want to cry tomorrow? Huh?”
While boxing fans were busy falling in love with the burrito-eating, beer-drinking slugger from Southern California, what they failed to realize was that Arreola was, indeed, lying to himself.
Arreola was convincing himself that he could live the life of an elite pro-boxer while maintaining an “average Joe” lifestyle. The “I’m a fat guy who likes to eat and drink” routine was real cute and endearing- Until he came up against someone who actually took the sport seriously.
Vitali Klitschko dominated their bout and forced an early ending. It was no contest as the brave, but inept Arreola clumsily chased after the defending WBC champ and caught leather whenever Vitali felt like connecting.
I’m of the opinion that Arreola never really had a serious chance of winning because of the vast difference in skill level and experience. However, Arreola, because of his lack of professionalism in training certainly made sure that any slim hope he had, would be made even slimmer.
Given Arreola’s limited skill-set, he had to give himself the best possible chance to pull off the mega-upset. He had to hit the gym and get in the shape of his life while working on genius strategies to shock and awe the Heavyweight titlist from the Ukraine. It would’ve been a monumental upset, but stranger things have happened between 38-year old champs and their eager, aggressive challengers.
Instead, it was business as usual at Camp Arreola, with even a rumored ten day suspension of training in order to “party.”
Sure, Chris Arreola is a tough guy- all fighters are “tough guys.” But in the world of prize fighting, real, legitimate toughness isn’t about being able to take a sustained beating for thirty minutes or even about giving that sustained beating; It’s about being able to wake up early every morning and hit the road, it’s about busting your behind in the gym to get in shape, it’s about making personal sacrifices for your passion and it’s about putting in the hard work to actually learn your craft.
So, excuse me if I don’t get a lump in my throat when watching Chris Arreola cry after his loss. Like so many well-meaning losers, he just never took things seriously until it was too late.