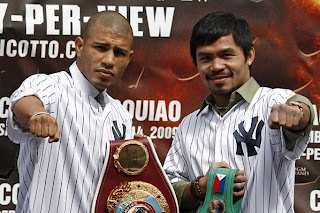 Julio Cesar Chavez Jr. (40-0-1, 30 KOs) has been added to the Cotto-Pacquiao undercard on November 14th. Chavez Jr. will be taking on Troy Rowland (25-2, 7 KOs). By the way, Rowland is ranked #222 by Boxrec.
This was the spot long rumored to be set aside for Humberto Soto vs. Edwin Valero. Unfortunately, immigration, legal and medical issues never allowed that fight to be anything more than a rumor.
Also on the card: Daniel Santos will finally be defending his WBA Jr. Middleweight crown against Yuri Foreman and Jesus Soto-Karass will take on Alfonso Gomez. Rumor also has Eric Morel vs. Z Gorres for the WBO interim Bantamweight title as a back-up in case the Santos fight falls apart.