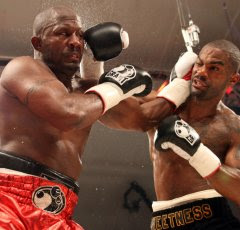 As the crowd was entering the circus tent, Tyrone Brunson was entering the ring. The record holder for most consecutive knockouts, challenged Marcos Primera to eight rounds of fight action. Brunson looked the part of a knockout king, but could not put Primera to the canvas. The fight ended in a unanimous decision in Brunson’s favor.

In the next bout of the evening Tor Hamer embarrassed Howard Jones. This fight had just begun, when it was ended. Hamer came out swinging and Jones was quick to fall. After staggering to his feet the ref called the fight.

The last non-televised fight of the night was a tribal war between Brooke Wellby & George “Comanche Boy” Tahdooahnippah. Indian drums were beat as the fighters entered the ring and you could tell “Comanche Boy” was the crowd favorite as the fighters entered the ring. Wellby a Native American from Winnipeg Canada needs to carry papers to prove his heritage. The crowd cheered their fighter to a unanimous decision.

Then just as you thought everyone was getting ready to watch the televised portion of the card, most of the crowd left. I guess this is a sign of “Comanche Boy’s” following. Everyone who was left turned their attention to Antonio Tarver.

Marcus Johnson and Victor Villereal kicked off the televised portion of the night. Johnson looked crisp with powerful punches to the head and body. Villereal had his most aggressive round in the 5th, but followed that up by being knocked down in the 6th. Johnson tried to put Villereal away in the 7th, but Villereal survived the rest of the fight. Johnson won on all three scorecards 80-71.

In the best matchup of the night Antwone Smith stopped Henry Crawford. Crawford started the fight using his speed to land the better combinations for the first two rounds. Smith looked better in the 3rd and then buckled Crawford with a body shot to end the 4th. The 5th round was a toss-up. In the 6th Crawford danced his way to the canvas. Leaving his hands down and spitting out his mouth piece he survived the round. Crawford looked better the next couple of rounds, until the last seconds of the 9th. He regained himself long enough to make the bell. Then his corner made the decision to call the fight.

The crowd continued to dwindle as the main event got under way. Allan Green was the aggressor during the early rounds. Then in an attempt to change things up Simms went with the southpaw stance for the middle rounds. Green continued to land powerful punches for the later rounds and scored himself a unanimous decision. Green is currently the alternate for the Super Six Tournament.