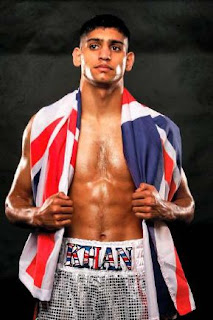 The 22 year old Khan will fight on December 5th at Newcastle’s Metro Radio Arena which has a capacity of over 10,000. Salita, 27 has been in the mandatory position for well over 15 months has an unbeaten record, but he did draw against Ramon Montano after Salita was knocked down twice in the first round.

“For Amir’s first defence this is a very tough fight for him and he’s taking on a fighter that the American media are really building up at the moment,” said Warren. “Salita’s got a great record, he’s unbeaten and carries a big punch and of course he will pose a threat to Amir, but Amir’s a world-class fighter and has to deal with these challengers. I’ve promoted a lot of shows in Newcastle with all the big names like Naz (Naseem Hamed), Joe Calzaghe, Ricky Hatton and Nigel Benn and I’m delighted to bring Amir to the city for the first time. The public there are big sports fans and love the big events and it’s great to bring them a fight like Khan v Salita.”

Salita hasn’t beaten any world-class opponent in the ever deepening talent rich 140 pound division. Where does this leave Argentinian Marcos Rene Maidana, who brawled to a six round stoppage defeat of Victor Ortiz in a bout televised on HBO? He should get his title shot in 2010 but would Maidana have been defeated by then? He lost a hometown decision against Andreas Kotelnik at the beginning of the year. One thing the WBA saga has guaranteed at light welterweight, quality match-ups, and I don’t complain when a few of them come along.