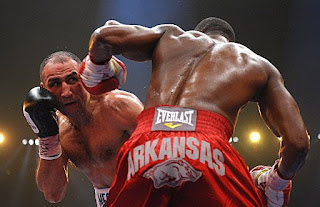 Too skilled, too accurate and too good of a puncher, Abraham, 168, Berlin, Germany, via Yerevan, Armenia, outclassed, wore-down and ultimately stopped the brave Taylor, 166.5, Little Rock, Arkansas, in the closing seconds of the final round to take the maximum 3 points in the opening group stage of the Super 6 Boxing Classic. The two former middleweight champions battled in front of a packed crowd of 15,000 at the O2 Arena, Berlin.

Taylor started lively, outpunching Abraham to take an early lead in the first round. Abraham looked a bit tentative in the opening exchanges and kept a very high guard throughout the first two rounds. In the second round, Taylor was warned countless times for low blows and Abraham took a 30 second break for a punch that landed south of the border.

Abraham, 31-0 (25 KOs), had the edge in power, and while Taylor, 28-4-1 (17 KOs) utilized his jab in rounds three and four, the American got caught by wild left hooks in close that immediately got his attention. Neither blows took any discernible toll on “Bad Intentions”, and he exchanged combinations to the head and body with Abraham as the action warmed up in the fifth round.

As the rounds wore on, Abraham began to settle into the kind of rhythm on which he has forged his reputation. His right hand collided with Taylor’s chin several times, with increased authority, and the American’s punch output decreased significantly. Taylor’s punches lacked the kind of power that Abraham was able to demonstrate.

Taylor’s chin absorbed some more left hands and right hands in the seventh round before Abraham unleashed ominous series of left hooks to his rival’s body. With his confidence sky high, Abraham began to showboat, playing with Taylor and dropping his gloves. Taylor began to retaliate with a right uppercut that landed on the inside. This level of resistance by the former Olympian was not anticipated by Abraham or his team. Their expectation was that Taylor would crumble not long past the halfway point, but the American held his ground and was still in contention after round 8.

Taylor may have outworked Abraham in previous rounds, but the quality of punches were being thrown by the German based Armenian, who landed a hard right that wobbled his opponent in the ninth round. Remarkably, Taylor finished the round on his feet, but Abraham was confident that the win was already in the bag. “King Arthur”’s strength showed in rounds ten and eleven as he landed solid combinations of punches to the head and body of Taylor who was tiring rapidly, but he withstood a sustained assault over the final couple of rounds and stayed on his feet until 15 seconds from the end, Abraham landed a crunching straight and short right hand down the pipe which completely knocked Taylor out senseless. Taylor was counted out on 2:54.