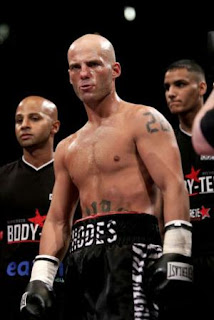 In a British fight of the year contender, Ryan Rhodes threw of the veil of anonymity that had shrouded his career to date by stopping Salford star Jamie Moore in a war at Bolton Arena.

The winner is in line for a shot at WBC champion Sergio Gabirel Martinez in 2010, so there was a lot at stake for two boxers who have been more of problem children than cash cows for their promoters.

The fight started scrappy with Moore the aggressor edging out into an early lead. Moore began to walk through Rhodes and landed heavy punches that wobbled Rhodes in the fourth.

Rhodes began to find his range and frustrated Moore from the fifth round onwards by varying his range. Rhodes then had Moore hurt in the sixth, before a late comeback might have swayed the judges to score the round to Moore.

The seventh was probably THE best round of many from the domestic calendar in Britain, with Rhodes cranking up the pressure and sent the champion to the canvas with a short and sharp right hand. The champion looked all over the place as referee Howard John Foster reached the count of eight.

The Salford man showed true champion heart, by battling back to stun Rhodes and in the middle of the round they traded big shots to send the crowd into raptures. Rhodes landed another sweet right hand that hurt Moore and backed up with several unanswered punches that saw referee Howard John Foster step in at the 02:35 mark.

There’s a call for a rematch, but with limited career time remaining, Rhodes must press on in his quest to reach his holy grail and that could happen, especially if Martinez vacates his belt to fight Paul Williams. Credit for his hard work and discipline, Rhodes deserves a title tilt just on his professionalism in the sport.