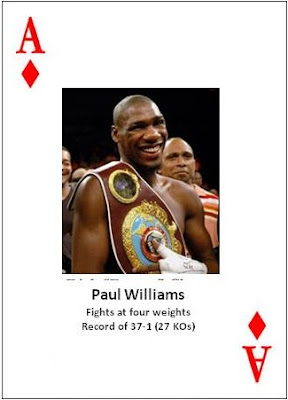 Four-weight fighter Paul Williams has been waiting for Kelly Pavlik since September. The bad news is he’s still waiting and after news broke out that Pavlik wanted to further delay his fight, Williams and his team stood firm and cancelled Kelly Pavlik off the December 5 list. In a follow up from Tomasz Adamek, we assess Paul Williams’ current options and possible paths, judging fighters he should challenge, and the fighters he should definitely avoid.

Firstly, we estimate that Williams’ goal is to get a fighter that brings him recognition, money and most importantly victory. We then looked at who’s called out Williams, who’s in a better position than Williams and who Williams needs to get his reputation up to world class. 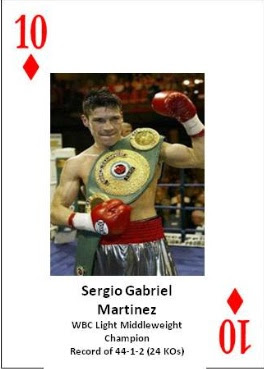 Sergio Gabriel Martinez: The Argentine WBC light middleweight titleholder has been a candidate from the start and is a name that many feel would prove if Williams has the bottle to cut it at the top level. Many have even gone as far and mentioned the ‘D’ word, ducking to suggest that Williams will fight an older American to avoid fighting Martinez. It would be a cracking contest, with Martinez playing the spoiler countering hard at any occasion. It would be interesting to see if Martinez does try and attack Williams’ body as he’s done with previous opponents as the rangy American could easily pick him off with that jab. It’s an interesting bout that most fans on our forum would prefer to see over any other possible opponents. If Williams wants to enhance his recognition further at light middleweight, Sergio Gabriel Martinez is certainly the guy to do it. Does Martinez bring money on to the table? Probably not enough for the Punisher’s liking and for that reason the fight is in jeopardy.

Joshua Clottey: The former welterweight belt-holder thought he had won the lottery when he landed a fight with Shane Mosley on December 26. The cancellation curse struck again and Clottey was forced to search for a new opponent. Up came the chance to fight former Puerto Rican welterweight titlist Carlos Quintana at a catchweight of a 149 pounds, but the cancellation curse got the better of the fight as Pavlik pulled out of the main event. As Clottey doesn’t have an opponent and as Williams doesn’t have an opponent, surely logic and fate points them towards each other, right? The Ghanaian brings money to the table, recognition and an opponent Williams should beat at a higher weight. Clottey would demand more money than the rest of Williams’ opponents. It would be a more gripping contest with Clottey absorbing punches on his guard and probably easily getting out-pointed by the mystery of Paul Williams. Probably has the skill set to put up a fight against Williams, but as we saw against Cotto, not that adrenaline rush to throw punches at will in the dying stages of a very close fight. This makes too much sense for the fight to happen.

Clottey recently turned down a 650K payday to fight Williams in December. Williams should offer more money to Clottey and beat him. He’s there for the taking for Williams.

Kermit Cintron: After a ridiculous draw against Sergio Martinez, Cintron turned the tables with an impressive points victory over the monster Alfredo Angulo. In his homecoming l 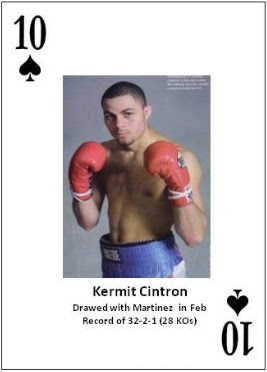 ast week, Cintron stopped Juliano Ramos in 5 to send his home-crowd into raptures. After more than a little tussle in the post fight press conference with WBA light middleweight champion and fellow countryman Daniel Santos, that fight will surely happen in 2010. That means that Cintron would probably fight once more in 2009, could that be against Paul Williams? Another former welterweight titlist, Cintron has suffered with a bad guy reputation that has hindered his fanbase considerably. So he’s in good shape after a win at the weekend. He can go and rest with his family for two weeks and then train hard for a major payday. However, Cintron might bring money, recognition and more than a beatable opponent if he is put under pressure, but the Puerto Rican star might have a few tricks up his sleeve to defeat the American. He might fight for half the fight, but Cintron does possess serious knockout power in both hands, an ability to move around the ring and uses enough lateral movement to confuse the Punisher. A fight I would certainly want to see.

Sebastian Sylvester: Who’s Sebastian Sylvester I hear you ask. He’s the IBF middleweight champion that’s the most wanted fighter in the world right now. Over half the division have spotted Sylvester as the major weak link in the division’s titlist and are all queuing up desperate for an opportunity against the German. What makes Paul Williams so special in front of Anthony Mundine, Daniel Geale and Matthew Macklin? He brings more money than all three of them put together. What would Williams do with Sylvester? Take his title, use it in the future as an advantage in any purse bidding. Ok, you couldn’t fill a phone booth with the number of Americans who would recognize Sylvester if he walked down the street, even though he looks like something from ET. That means the fight would have to take place in Germany to make any money. Williams would stop Sylvester inside 6 despite the bias officials. Sylvester’s team wouldn’t fight Williams if he could carry a crowbar in the ring and Williams would have to throw gallons of milk up and down in the minute interval between rounds. But they must realise he’s just another useless asset to their promotional company.

Sergiy Dzinzurik: This fight was supposed to happen in September, but a certain Kelly Pavlik got their first. Following his promotional company’s failure to land him this fight, Dzinzurik quit his suit and left in his bid to land his major fight. He must have felt like a donkey when Pavlik pulled out the first time and he was leading the race with Sergio Gabriel Martinez to replace the Ghost. Anyway 3 months down the line and it’s the situation. In need of a smaller challenger that will put up a fight for eight rounds and then crumble under his hard work and lose the last four rounds. Dzinzurik doesn’t crumble. That’s why he’s unbeaten. Don’t underestimate him because you can’t pronounce his name and wouldn’t know him if you married his daughter. He can fight. He has a poor risk/reward ratio, similar to Adamek-Cunningham II situation. Williams would get little credit for defeating the tough Ukrainian.

The Boxing Tribune Pathway Too Success: If you want to make yourself a world class name in the sport, Williams would fight Joshua Clottey, probably the highest ranked fighter in contention. A Williams’ win would set up numerous fights from junior middleweight to super middleweight. With Jermain Taylor rumoured to be pulling out of the Showtime Super 6 Boxing Classic, could Paul Williams be his replacement?