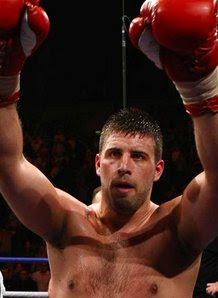 In a packed and noisy Odyssey Arena in Belfast, Northern Ireland, reigning British Commonwealth heavyweight champ, Sam Sexton managed to prove that his first win over former champ, Martin Rogan was no fluke.

Sexton stood his ground against the motivated and hard-charging hometown favorite, doing his best work in the sixth by staggering Rogan with shots straight up the middle.

Rogan didn’t answer the call for round seven, claiming an injured arm.

Up until the stoppage, the fight was on a pace to match their first encounter, a similarly see-saw battle which also ended in Rogan being forced to throw in the towel.

After the bout, Sexton dreamed aloud by calling out the winner of the Haye-Valuev fight the following night.