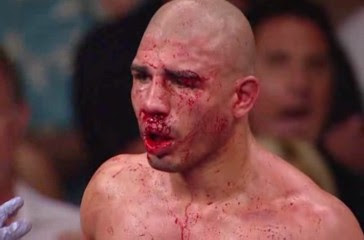 “Is Cotto on an irreversible slide?” I wondered after his entertaining bout with the durable Ghanaian Joshua Clottey, on June 13.

In my opinion, Clottey is good, but not a great fighter. He was born to be a difficult opponent, not a Hall of Famer. And winning a split verdict over that type of fighter is usually what happens when a fighter is on the way out, not on the way up.

It made one wonder, if Cotto is on the wane. The theory starts with his personal issues, with his uncle and former long time trainer Evangelista Cotto, which resulted in the promotion of Joe Santiago. With lawsuits hired and fired, Evangelista never gave up in his pursuit of suing the welterweight titleholder. Cotto also split up with his wife on countless times, for reasons I’m not aware of.

His training camp has switched to Florida, which was allegedly a fraction of the rift with Evangelista. He’s fallen a few paces behind Top Rank’s cash cow and next opponent, Manny Pacquiao. Arum had never imagined of holding a bigger attraction than Cotto a few years ago, but after discovering the rough diamond, the Phillipino has stamped his presence all over the sport. Cotto can still make money, but Pacquiao is making history.

He’s had a personality makeover since the Antonio Margarito fight. He was such a dead-pan character for so many years that it’s strange to see him covered in tattoos and sneering a bit.
We’re also seeing more of his children, as if Cotto is trying to re-build the person that had been shattered by Margarito. The stoic, somewhat robotic Cotto, has been replace by a family man, that’s trying to reclaim what Margarito had taken.

Cotto has been dismissive of Margarito’s loaded gloves controversy. As we all know, Margarito was later suspended for the use of illegal handwraps against Shane Mosley, and could well have been armoured against Cotto.

But even if Cotto dismisses the “L” on his record, and us fans place an asterisk next to that bout, you cannot dismiss the physical toll dealt out by Margarito. The demons in Cotto’s mind may have been put to rest by surviving the 12 stanzas against Clottey, but demons still lurk in his body, in his bones and his gray matter.

If the ‘Ghost of Margarito’ is still tap-dancing in Cotto’s skull, Pacquiao may be victorious before the first bell. Fear or no fear, Cotto needs to start trekking if he wants to climb the Pac-Mountain. That trek starts at the press conferences, to gain a psychological advantage over the smaller man. The question “Is Cotto on an irreversible slide?” will be answered on November 14.