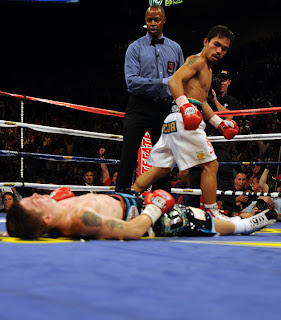 Manny had already shown what he could do against a much larger De la Hoya, now this was to be his second fight as a major player and attraction on the world stage.

Ricky Hatton was the lineal Jr. Welterweight champion and a fixture in the division since 2001. Despite a loss to Floyd Mayweather Jr. in 2007, Hatton had never been defeated at his natural weight of 140 lbs.

Pacquiao flattened Hatton in a brutal stoppage that had Hatton stretched out on the canvas for several minutes.

Excellent win for Manny and a strong second chapter to the book entitled, “Manny Pacquiao, Superstar.” 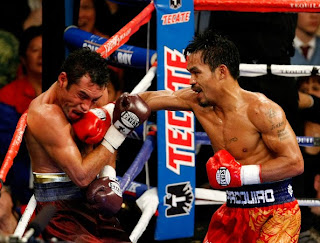 Not his best performance, but certainly his biggest. Manny beat and humiliated The Golden Boy before forcing De la Hoya to quit between rounds eight and nine. Alot has been said about De la Hoya’s physical condition coming into the fight and that may or may not detract from the victory for some, but coming into the bout, De la Hoya was a huge favorite and the idea of a Pacquiao win was the punchline to a bad joke for most experts. 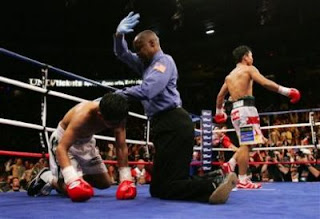 Maybe Morales was on a losing streak when this rematch took place, but there was no denying that this was still “El Terrible.”

This was a big match for Manny, who had been beaten by this same man just about a year earlier. It was the official announcement to the world that Manny Pacquiao was for real.

Pacquiao, for the first time in his career, was fighting someone who wasn’t looking to walk right through him; Morales was a veteran champion who boxed perfectly and used flawless technique to keep a hard-charging Pacquiao at bay.

What most defined this fight was not Pacquiao losing, but Pacquiao’s desire to keep chugging along in his career. He would come back to beat Morales twice in rematches. 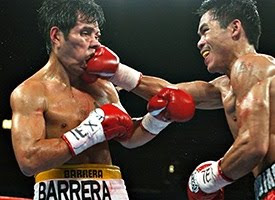 Manny was unknown by all but the most hardcore of fans and was expected to be just a “stay busy” fight for Barrera. The Mexican warrior was at the height of his fame after having beaten Hamed, Morales, Tapia and Kelley in 4 of his previous 5.

Plans changed drastically, however, as Pacquiao tore into Barrera and beat him at every aspect of the game. He literally steamrolled the “Baby Faced Assassin” and forced Barrera’s corner to stop the contest in the 11th.