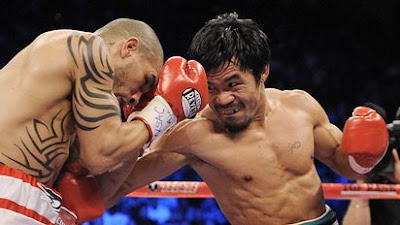 Manny Pacquiao lined up the shot with the cunning of a pool shark, and when his right hand flashed out and drilled Miguel Cotto on the chin in the third round, the Puerto Rican suddenly found himself on his back. A gasp went up in the pro-Cotto side of the MGM Grand, and it looked momentarily like boxing’s proudest fighter was on his way to retirement.

Going into the WBO welterweight title fight between both elite fighters Miguel Cotto and Manny Pacquiao at the MGM Grand, Las Vegas, there was a lot of discussion in the boxing community about the manner in which the fight was going to be won and lost. To say the undercard was shabby would be an understatement, but the main event was something to treasure forever.

Cotto’s best moment came in the opening round, and although he kept it close in the first half of the fight, he never had Pacquiao in serious trouble. And as the rounds went by, Cotto’s irreversible slide just got steeper.

The fight plan that Cotto had drawn up, along with his new trainer Joe Santiago, was to establish a potent jab and to force the Filipino backwards. However, in retrospect, it might have been better if Cotto had immediately jumped on Pacquiao and gone all-out for the kayo. But he was morphed into a prudent tactician on the night, and a quick blitz was not part of the blueprint. That blueprint was out of the window in the 4th round, after Pacquiao landed a sharp left uppercut that saw Cotto fall to the canvas for the second time in the fight.

After five rounds, Cotto had won 2, but should have won 4, had he been born with a bit more awareness. Instead of being 49-46 up, he was 48-45 down. By the seventh round, Cotto’s gas tank was perilously close to empty, but Pacquiao gave him no favours, backing him up into the ropes on every opportunity.

From then on it was brutal. Referee Bayless had more than enough opportunities to stop the contest, but failed to act until the final round. Cotto bravely fought on with a cut over his right eye, and deep swelling covering his eyes and making him look like a panda. Cotto’s wife Melissa had seen enough, and walked out after the tenth round.

Pacquiao was again at his sublime best, but the lack of authority to force the stoppage by Cotto’s corner and on the referee’s behalf, tarnished his amazing achievement. A bout with Mayweather is a must for Team Pacquiao as he reaches the bracket of All Time Greatness.