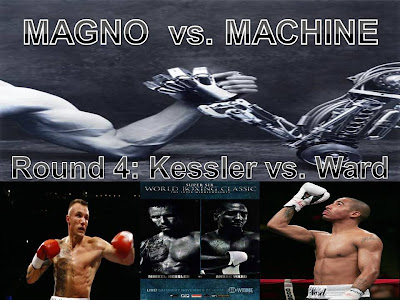 After 3 rounds of competitive action, Magno and Machine can’t be separated. With both camps beginning to realize the importance of the contest, scheduled for 12/15, both are eager to get their noses in front as the battle heats up. With the comeback of the fan-friendly Super 6 Boxing Classic, both challengers will predict the outcome of Mikkel Kessler vs. Andre Ward.

Magno: For better or worse, this may be the one the separates the man from the machine. There’s no cold, hard logic to explain my pick in this one, no statistics back me up and I have no logical basis…this is based on a gut feeling.

I feel that Kessler’s ultra-orthodox style will be relatively easy for Ward to deal with and that Ward, while having only shown this briefly as a pro against Miranda, has a championship presence that will push him to victory

My pick is Ward via close UD.

Machine: A gold medallist against an experienced Viking Warrior. This one could really go either way.

The calibre of opponents on the Dane’s record is far superior than the Oakland prospect. The names include Librado Andrade and Anthony Mundine, with a defeat to undefeated superstar Joe Calzaghe. Ward’s major win was a shutout decision against hard-hitting Edison Miranda.

With superior strength and power, the Dane will utilize his orthodox jab, to keep the speedy American at bay. Andre Ward will try and go in and out of range and trying to protect his weaker chin.

With the Europeans already 2-0 up in the Super 6 series, could Ward get the Yanks on the board. Or would Kessler ensure a first round whitewash to the Europeans?

Ward will easily win the opening rounds against the painfully stiff Kessler, but as the rounds wear on, so does Ward, and his speed and reflexes slow down dramatically. Kessler takes advantage, landing power shots frequently, and evening it up on the scorecards at the halfway mark. A ferocious uppercut dents Ward’s chin, and the American Olympian goes down in the eighth. He survives the round, but Kessler comes out banging, stopping Ward in the ninth.

Kessler the winner by 9th round knockout.