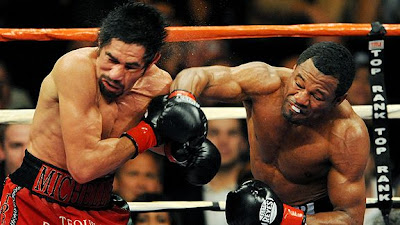 As the talent rich, money making welterweights relax before the festive vacation, none of them will predict the turmoil that could eventually see the division collapsing, as one of the main money sources in 2011.

Star after star, the galaxy of welterweights will drastically fade in 2010, with retirements, defeats and weight jumping, destroying the near perfect atmosphere within the weight class.

And when Manny Pacquiao and Floyd Mayweather finally turn towards each other, they would create the biggest buzz ever created in the modern era of the sport. The 147 pound division will be the centre of the universe as both red giants collide in a battle of the supernovas.

Where does that leave Shane Mosley? If he loses to Andre Berto, there’s no-one to fight at 147 pounds, as Miguel Cotto wouldn’t dare cross paths with Sugar Shane again. In his hour of need, will Paul Williams be his knight in shining armor and battle him at the 147 limit? Highly unlikely.

Welterweight could lose three superstars in half a year. Three pound-4-pound ranked fighters. Three legends that have truly left their mark on the sport with outstanding, but all different legacies which stand out from the rest.

And if Miguel Cotto had anything left after last year’s loss to Antonio Margarito and his split decision victory over Joshua Clottey, Manny Pacquiao would either bring it out of him, or beat it out of him. He duly delivered, and probably smashed Cotto’s half life into smithereens. That’s another slightly more faded welterweight star, gone.

Can the icons make another impact, such as Ricky Hatton, Juan Manuel Marquez and Jose Luis Castillo? They might even turn to each other, in a true crossroad elimination process that would see the loser retire, for good.

With Joshua Clottey and Carlos Quintana likely to move up in weight, and once-great Zab Judah scampering down south, the depth of the division is quickly deteriorating. Names like Luis Collazo and Carlos Manuel Baldomir are simply stepping stones in the asteroid belt, waiting for a young rocket to dent.

Is the division’s superhero and savior Andre Berto? He’s hardly impressed in his recent performances against immobile Juan Urango and a post-prime Luis Collazo. Can he step up to the thrown and take over the reigns as the leader of the new welterweight revolution?

By 2011, Saul Alvarez would surely have stepped up his level of competition, and maybe young Brit Kell Brook can cause a stir among the HBO missionaries. Could Mike Jones be the next great American welterweight?

If the stars of today hang up their gloves in 2010, the welterweight division would be in a transition period. As the greedy, inflated egos of Mayweather, Pacquiao and Mosley disappear into the black hole, they would be replaced by the hungrier bright stars of tomorrow. Could the 2010 black hole be good for the division?