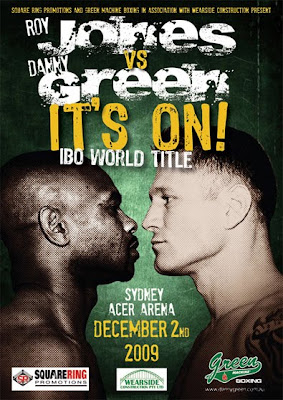 If you’re waiting for the tape delayed broadcast of this contest tonight on the Hopkins-Ornelas show and don’t want to know what happened, please don’t click on the “read more” prompt.

If you’re dying to find out, by all means, come on in…

In a complete shocker at the Acer Arena in Sydney, Australia, Aussie slugger, Danny Green (28-3, 25 KOs), needed less than a full round to dispose of “living legend” and future hall of famer, Roy Jones Jr. (54-6, 40 KOs) in Jones’ bid to capture Green’s lightly-regarded IBO Cruiserweight title.

Jones came out as expected, moving and flicking the jab while Green pursued. At about the midway point of the first round, Green trapped Jones against the corner and lobbed an overhand right that struck Jones behind the ear and caused him to fall to the canvas. Jones got up on unsteady legs and tried to survive, but Green was all over him and forced referee Howard John Foster to call an end to the contest at the 2:02 mark.

This is hopefully the end of the line for Jones.