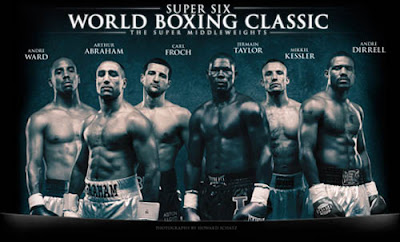 March 6: Andre Dirrell vs. Arthur Abraham – Andre Dirrell will fight Arthur Abraham at the Rancho Mirage in California. This fight will open the second stage of the Super 6 Boxing Classic Tournament on Showtime, which Abraham tops at the moment. Could Dirrell make up for his split decision defeat to Froch?

April 17: Carl Froch vs. Mikkel Kessler – Carl Froch will make his third defence of his WBC Super Middleweight belt against Dane Mikkel Kessler, in either the City Ground, Nottingham, or a venue in Copenhagen or Parken. The venue will be decided in the subject of a purse bid. Could Kessler get back on track or will the Cobra qualify for the semi-finals?

April 17: Andre Ward vs. Jermain Taylor – To finish off the live doubleheader on Showtime, Andre Ward will defend his WBA Super Middleweight belt for the first time against Jermain Taylor at Oakland. Ward suprised most by defeating Kessler in Stage 1, and should have enough in the tank for Taylor. Could Taylor roll back the years and outbox Ward?