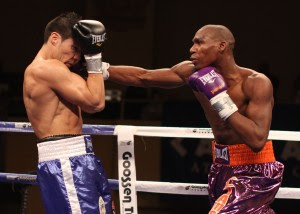 In a thrilling back and forth war at Boardwalk Hall in Atlantic City, Paul “The Punisher” Williams (38-1, 27 KOs), beat fellow southpaw, Sergio “Maravilla” Martinez via Majority Decision.

The fight started with Williams being slightly more aggressive than usual and forcing Martinez into a knockdown which instant replay showed to be more off-balance slip. Martinez answered back by stunning Williams at the end of the round and knocking him down and up against the ropes.

Williams, for his part, was firing away, getting caught with big shots, but still throwing his own responses.

Despite some tense moments in the first four sets and a couple of cuts around his left eye, Williams started finding his rhythm in the middle rounds and the rest of the fight consisted of Williams advancing and Martinez in strategic retreat, looking to counter.

Both fighters landed crowd-stirring bombs throughout the final few rounds and as the final bell rang the result was anything but a foregone conclusion…well, one person surely had his mind made up.

Judge Pierre Benoist scored the fight 119-110 in one of the most curious scores of the year. Thank God the other two judges were actually watching the fight: Lynne Carter and Julie Lederman got it right with 115-113 and 114-114 respectively. The BTBC scored the fight 115-113 in favor of Williams.