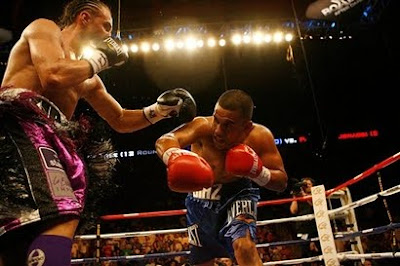 First, I’m not of the opinion that Paulie was robbed in the first fight. The Gale Van Hoy score of 118-110 for Diaz was obscene, but the fight itself was close and could’ve gone either way.

And now, as both fighters gear up for the rematch of their August encounter, the stage is being set for another controversial decision that is almost guaranteed to lead to a third encounter. All judging issues aside, the match-up itself screams controversy.

Malignaggi is a quick, feather-fisted stylist while Diaz is a light-hitting, overstuffed lightweight pressure fighter. Both fighters execute their styles perfectly.

Generally speaking, some judges value style and defense while other more readily score aggression and fighters who come forward. With neither fighter having enough power to change the course of the fight, Diaz-Malignaggi is always going to be a recipe for diverse scoring that depends on one’s own judging aesthetic and criteria.

Now, having said that and established the fact that Diaz-Malignaggi will always be a tough fight to call, the heat brought into the rematch just may have ensured a Malignaggi win and yet another controversy.

Malignaggi’s rant after the first bout was one of the most memorable moments of the year for HBO and his heartfelt accusations are still reverberating throughout the boxing world. Don’t think for a second that the assigned judges for the rematch will be immune to the pressures created by the controversy surrounding the first bout.

It may be the case that all three judges will come into the bout focused and fair and ready to take an even-handed approach to their jobs. It’s just as likely, though, that Malignaggi, as the perceived victim, will get the benefit of the doubt on close rounds a lot more than he did the first time.

Then, consider that judge Mauro Di Fiore is a local Chicago judge with little experience outside of Illinois and that one of the other judges, Tom Miller, is no stranger to controversy himself after scoring Chris John-Rocky Juarez I a draw.

The end result of this Saturday’s contest is bound to have some controversy behind it unless one of the fighters can significantly up their game enough to make the judging process more than just a contest of personal judging criteria. But don’t count on it.

Instead, get ready for some more boxing judge controversy and losing fighter pathos. And prepare yourself for part 3.