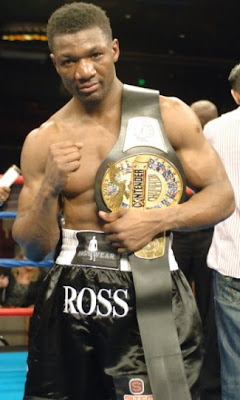 You wouldn’t know it unless you’re Canadian, or a boxing fanatic checking results and web pages from around the globe, but Troy Ross fought Saturday night, and knocked out Daniel Bispo in just over a minute. On the big stage this was lost with Paul Williams and Chris Arreola fighting on the same night on HBO but I think Ross deserves more attention, a grander stage, and the opportunity that The Contender series was supposed to give him.

Other than Sergio Mora, who’s claim to fame is two wins over Peter Manfredo and a decision over Vernon Forrest (Forrest evened the score in the rematch), we’ve heard little or nothing from past Contender winners. The series was designed to give up and comers and a few considered over the hill a shot at glory, some recognition and more opportunity than they would otherwise be given. We’ve seen none of it. Of all the Contender alum, I think Ross deserves the opportunity the others aren’t getting.

Ross is a rare talent in a division often overlooked by fans, writers, and some cases event he fighter them selves. Cruiserweights don’t get much attention and the good fighters are all looking to make a move to the heavyweight division where the money, fame and name fighters are. Ross is just fine where he is and we need to see more of him.

“The Boss” as he’s known to his fans, is a Canadian cruiserweight champion, a former Olympian (second generation-his father was an Olympic boxer as well as his cousin Egerton Marcus), and a damn good fighter. An imposing physique, solid boxing skills, and a punch that can end a fight in a flash give Troy all he needs to be TV friendly in a sport that can always use entertaining fights. He’d be a perfect fit to headline a Showbox card or an ESPN show, there’s more than enough TV time to go around.

Ross is deserving of more exposure and should get it. Without it, boxing fans are missing out on another very talented fighter who may end his career as a local all star, but never make it to the big stage.