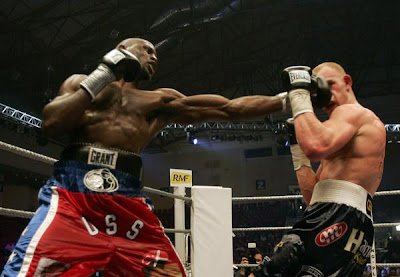 Let’s get real. The 200 pound division is a bitch of a division. A tease. Whenever the division finds a talented titleholder, he bottles it to heavyweight. That’s been the case for years. Recently, newly crowned Cruiserweight king Tomasz Adamek made the move up to heavyweight, leaving the division in desperate need for a new champion.

Bernard Hopkins has hinted many times of jumping up to cruiser and fight Adamek. It would’ve energized the division, and brought much needed attention to a competitive division. Nothing came in the end. The boxing public cried out for a rematch between Adamek and Steve Cunningham, but they thought different. When good match-ups are thrown out by the media and fans alike, the Cruisers ride the wave of good karma and let the cry die out.

The thing that grips most followers of the division, all 36 of them, is that anybody in the Top 50 could beat each other. This makes the division almost unpredictable. Also, the tailend of any top 10 Cruiserweight ratings can be made up of thousands of different combinations, and still be regarded as credible. You can make a case for any 200 pounder to be in the Top 10, seriously.

Who could succeed Adamek as the Cruiserweight King? At the head of the class is Philadelphian Steve Cunningham, one of few cruiserweights who have boxing ability not just power. He took Adamek the full twelve and may have won it if there was another set of judges involved.

Krzysztof Wlodarczyk, another Pole, is 1-1 with Cunningham and is closely behind the ex-Navy man. Wlodarczyk hasn’t done much lately, but received a tough decision against Giacobbe Fragomeni at the turn of the year. What goes around comes back around, eh?

Fragomeni recently dropped his WBC title to Zsolt Erdei, the new kid on the block. The Hungarian defended his WBO light heavyweight belt for years in Hungary against unknown opponents, but could blossom in the talentless division. Maybe he holds an advantage because he can box, but he does give away 15 pounds to most top Cruiserweights.

Guillermo Jones has done nothing since winning his WBA belt against Firat Arslan. He scheduled a fight in France but cancelled a month before fight night. Jones was comfortably beaten by Cunningham earlier on in his career, so maybe he’s not a contender for top dog.

Marco Huck, another Cunningham victim, has matured since his only career defeat and now holds the WBO version. He’s been impressive holding back the wild swings of his early days by outpointing Victor Emilio Ramirez to win the belt, and Ola Afolabi in his first defence.

New face to be recognized is Denis Lebedev, who has two impressive stoppages on the right side of his record. His demolition of Enzo Maccarinelli made people take note, and his battering of Ali Ismailov raised a few eyebrows.

Cuban starlet Yoan Pablo Hernandez surpassed expectations by coming to Germany to defeat Enad Licina by decision. He out-classed the Serbian and could be inline for a shot at the IBF title in late 2010. Could the Cuban be a titlist by 2011?

Across the pond, Troy Ross keeps on winning and has true potential to be the next at the thrown. Matt Godfrey will be challenging Cunningham in 2010 for the vacant IBF strap, could he be the next big thing at 200 pounds?

Of course, I can’t forget Danny Green, or he’ll get angry. His stoppage of Roy Jones Jr. was an upset, but Danny, that doesn’t mean that you’re the best in the world. You just make it in my top 10, and if Bernard fights you, it’s a stupid decision because you haven’t earned it.

All in all, the division is very vague. I could go on for hours listing names of Eastern European fighters that fight out of Germany that might have something in their locker room to surprise us next year. Grigory Drozd, Vadim Tokarev, Alexander Alexeev and Alexander Frenkel are naming a few.

Why have I named that petty list of Eastern European fighters above? The heavyweight division is increasingly European dominated and lacks quality Americans, and is it really a surprise that the next division down south is on the same track? Outside of Cunningham, Godfrey and BJ Flores, every other fighter in the Top 20 was born outside of America.

What lies ahead in 2010? Another topsy-turvy year jam-packed with upsets and wars that please the spectators. Will there be an interesting fight at 2010? Will there be a champion by the end of the year? The division just keeps teasing.

Summary: Searching for a rematch with Adamek, and wasted half a year looking for an opponent that was never remotely interested. Godfrey will be next for the vacant IBF title.

Summary: Wlodarczyk deserved a second go at Fragomeni in a fight that many thought he’d won, including yours truly. A Hernandez fight is not yet signed, however it is set up as a potential eliminator for the newly crowned IBF champ.

Summary: Say what you like about Erdei, you can’t deny the fact that he’s talented and has something to prove at 200 pounds. His future at the division is inconclusive, as he may balance life between light-heavy and cruiser for 2010.

Summary: The best year of his boxing career so far, with two stoppage wins over former sparring partners and a world title victory with a sweet first defence. Could he be on the plane to America in 2010?

Summary: Hasn’t fought since his stoppage of Firat Arslan in September 2008, and will be dropped from my rankings unless he has something scheduled for March. I’m sure he’ll be gutted.

Summary: Fragomeni showed his grand old age of forty in both fights and his career is reaching the end. My advice, retire now to save punishment and keep yourself in good nick for the future.

Summary: Same as Jones. Fight before March or face the chop.

Summary: Another quality fighter to come out of The Contender reality show, and a major step up in class is awaiting him in 2010. Has potential to succeed Adamek.

Summary: Stepped into the limelight with a stunning knockout of Enzo Maccarinelli in a candidate for upset of the year. Didn’t have enough for Huck, but keeps his place in the top 10 for now.

Summary: Some might feel he deserves a higher ranking, Danny Green being one of them, but replacing Matt Godfrey at #10 was deserved and Afolabi’s performance was credible.