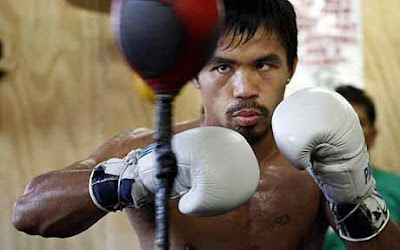 The ironic quote from a shell-shocked commentary team at Seoul 1988 will live long in the memory of any hardcore sport fan. Ben Johnson not only made the whole world stand still with his world record over the 100 meter dash, he also made the world take note of the lifestyle and pressures an athlete goes through, in preparation for the big stage.

No stranger to a big stage is Philippines icon, Manny Pacquiao. One of the best left-handed fighters in boxing history, Pacquiao has battled poverty from an early age to rise from the slums of General Santos City to boxing stardom. Pacquiao, similar to Johnson, carries the hopes of a nation to every event, consistently outperforming his latest feat with another spectacular performance from the top drawer.

The storyline that’s being portrayed, is again, very similar. A small town boy that struggled through childhood grows up to be one of the most influential figures in sport. The world is his oyster as he re-writes the history books, year after year after year.

The Cinderella story is something the public adore, and they bow to Pacquiao the same way they bowed to Johnson. As Johnson was victorious in Seoul 1988, his loyal Canadian fans jumped for joy, with the thought of enhancing drugs, never, crossing their minds.

After Johnson tested positive for performance enhancing drugs, his world came crashing down. The aftermath was complete madness, with anger being directed at Johnson and his team from all angles of the planet.

Since Seoul, has there been any major drug related incident involving a prime athlete or athletes, getting caught out by the system? No, because the IOC are petrified of alienating cooperate sponsors following the Ben Johnson saga. Many fighters who are past their best have been caught, Maurice Green, Tim Montgomery etc, but they were on an even higher level of anabolic steroids when they posted world record times. I’m convinced that the IOC turned a blind eye as they were looking for new stars to take the sport in a new direction.

Now, it’s Pacquiao’s turn to be criticized similar to Johnson. He’s recently rejected the call from Camp Mayweather for an Olympic style drug testing to show the gamesmanship included in a fight of this magnitude. This results in random sampling between a 30 day period, that Manny feels would disrupt his training camp and regime. Pacman’s recent disagreement has raised suspicions that Floyd Mayweather Sr. has previously outlined; that Manny Pacquiao is on steroids.

At this point in time, I personally don’t think Pacquiao is on performance enhancers. I just think he’s not willing to buckle down to another Mayweather suggestion, as he’s already given up in his attempts to make the fight at catchweight, staging the fight in Dallas, smaller size of ring, the weight and brand of gloves. Now, could it be blood testing? Manny has struggled negotiating with a stubborn Mayweather, and his camp’s tactics have made them look like novices in big fight psychology. Does this mean that Mayweather holds a significant advantage over Pacquiao come March 13?

Top Rank have recently forced Mayweather into a contract clause of $10 million if he comes a pound overweight, as they think he gained a significant advantage against Marquez coming two pounds over the contractual weight of 144 pounds, with anything extra a $250,000 fine. Floyd is a consummate professional, he won’t fall to Manny’s weight games. He’ll be on the money at 147 pounds. This just outlines how hypocritical Pacquiao and Arum have been over the course of the negotiation process.

So what if Manny Pacquiao was tested tomorrow and fails?

His Christmas wouldn’t be as cheerful for starters, but the repercussions would be even greater than Johnson’s, as it would be almost fatal to the sport. It would send shockwaves around the world, humiliating the sport for being so out of date. Pacquiao is currently at the top of the pound-4-pound stakes, he is also right up there with Mayweather as the biggest draw, and has one of the most vocal fanbase in recent memory. It would be disastrous if boxing were to lose a chunk of his fans, the Filipino public, and worst of all, the casual fans that tune in just to see this great fighter fight once in awhile.

Pacquiao would be banned from the sport for a calender year, thrown out of his run for congress, and the humiliation of bringing a bad name to a proud country such as the Philippines would probably force him to move elsewhere.

Could Manny really be on drugs? There’s of course the possibility, but I think it’s just rumours. But rejecting a drug test because your squeamish is hardly a reason to stop the best fight out there, is it? It only raises suspicions that Pacquiao is taking some sort of performance enhancing drugs, a cocktail maybe that makes him undetectable in a urine test.

What type of drugs could he be taking? As mentioned on our forum, Human Growth Hormone (HGH) is used to build muscle in anaerobic conditions. It is very hard to detect, and the side effects are also unclear. Anabolic steroids is a very common drug that’s used, especially in sports which require explosive power. It can be mixed with EPO, a drug that doubles the development of red blood cells in a human body, to make a cocktail of performance enhancing drugs.

At this point in time, I don’t think Pacquiao is on drugs. I just think he’s not willing to buckle down to Mayweather’s orders, as he’s already given up his attempts to make the fight at catchweight, staging the fight in Dallas, the size of the ring, the weight and brand of gloves, and now blood testing. Manny has struggled negotiating with a stubborn Mayweather, and his camp’s tactics have made them look like novices in big fight psychology. Does this mean that Mayweather holds a significant advantage over Pacquiao come March 13?

But Top Rank have recently forced Mayweather into a contract clause of $10 million if he comes a pound overweight. Floyd is a professional fighter, he won’t make that mistake. This just outlines how hypocritical Pacquiao and Arum have been today.

If I was Manny, I would take the test. Prove his doubters wrong, most of all Floyd Mayweather Sr. He might be superstitious, but what harm can a blood sample make? Losing a tiny amount of blood is hardly going to make him weaker. And to the members of Boxingscene, basically Pacquiao’s fanbase, Uncle Roger isn’t going to be coming around Wildcard gym pricking him with a needle. Mayweather isn’t demanding something that is a danger to his health, especially when you consider it to the ridiculous weight demands from Team Pacquiao in the past. He’s just making sure it’s a fair and level playing field.

The thing that’s made me laugh most about this recent debate, is that Freddie Roach verbally agreed to blood testing prior to Arum’s tantrum. “I have no problem with the testing whatsoever, they can do whatever kind of drug testing they want. They’re scared of Manny and his power. He’ll pass any test in the world.”

This recent drugs saga in the Sweet Science has pointed out how dated our current system is, and maybe, how fighters of the highest grade can easily cheat their way past a lacklustre system that’s currently in place.

Why not make Olympic style drugs testing a permanent feature in the game from Summer 2010 onwards? It only strengthens the sport and update the old system. It’s an advantage, not a disadvantage. 2010 is going to make or break the sport, why not rebrand the drug testing system while the eyes of the world are watching? It shows that we can independently make the sport fairer, without breaking any moral rules.

Top Rank might have only made a fuss about the drug test as a publicity stunt, but it may have dealt irreversible damage to Pacquiao’s once-in-a-generation legacy, and as the marketing of the fight goes on, every minor detail is pointing towards Mayweather, which gives me even more of a reason to believe that Mayweather will be crowned P-4-P king on March 13.