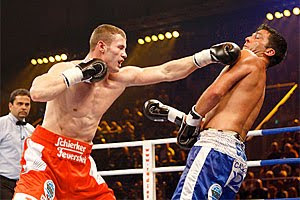 Acosta began the fight throwing wild, Mayorga style uppercuts and hooks, which immediately caught Stieglitz off-guard. He had a very awkward style, not trying to do anything spectacular only run around the ring and rush forward with a ten punch combination.

Stieglitz relaxed and established a jab, and that was it, the end of the fight as a contest. It was only a matter of time until the German stopping Acosta. In the third round, Stieglitz landed a solid left hook on the crouched down Acosta that knocked him down. Stieglitz began to target the body, hurting Acosta while he struggled to get out of his corner. But the Argentine was game, until the referee took it out of his hands and intervened.

On the undercard, Ina Menzer scored an exciting sixth round stoppage over Ramona Kuhne to rise up the women’s pound-4-pound rankings.

Undefeated heavyweight clown Manuel Charr (14-0, 7 KOs) scored a somewhat disappointing final round stoppage over Owen ‘Where’s my cheque’ Beck (29-4, 20 KOs), while Denis Boystov (27-0, 22 KOs) continued to smash through American club fighters with a second round stoppage of Kevin Montiy (17-7-1, 13 KOs). Khoren Gevor got back to winning ways with a ten round unanimous decision over Jefferson Luis Goncalo (19-6-3, 10 KOs), and finally, falling into the ‘don’t take everything for granted’ category falls Sebastian Kober (19-1, 13 KOs), who was surprised by veteran spoiler Zack Page (20-7-2, 7 KOs) by dropping a six round majority decision to the American.