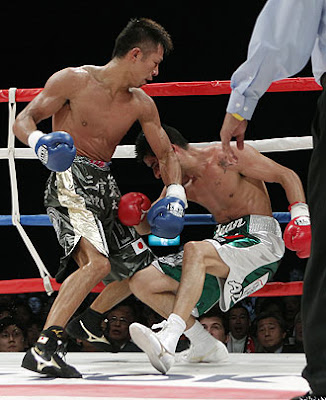 There were three fights to take interest for hardcore fans bright and early this morning from the Eastern side of the planet, two WBA title fights from Japan and a grumpy Australian middleweight fighting a blown up welterweight. Here’s The Boxing Tribune’s recap.

We weren’t brave enough to put a limb on the line in public, but we had an inkling behind the scenes that Salgado was no-more than a one hit wonder, a flash in the pan.

In his first defence of his WBA belt, it was his defence that was his major flaw. He struggled to get into the fight, and it looked like the Japanese fighter was always one step ahead, outworking him early on to gain a massive advantage over Salgado.

Right hand after right hand after right hand, Salgado looked like was going to tip at any moment in the final stages of the eleventh round, before the bell came and save him. The heavy handed Uchiyama could spot this, really swinging for the knockout. Salgado fell to the canvas in a heap, but got up at the count of eight. The stoppage came with less than twenty seconds remaining in the fight, with the new titlist unloading a ferocious attack on the now in dream street Salgado, to win the WBA junior lightweight title.

Salgado isn’t great, he never has been. It proved that his win over Linares was a fluke, but take nothing away from the Mexican who did show that he deserves maybe another shot at a weaker titlist. However, Uchiyama isn’t the next big thing, even though he fought the perfect fight tonight. I guess that’s another WBA belt that we’ve lost to another backyard fighter. It’s hard to judge his potential, but I would say he can maybe get a good fight out of a South African.

After watching Poonsawat, I’ve come to the conclusion that my dream fight under 130 pounds is him against Caballero. Poonsawat is mad, fearless, and 5 foot 4 (and a half). Caballero is mad, freakishly tall at 5 foot 11 (and probably a half). They would go to war, but with seven inches different in height, I still wouldn’t rule out Poonsawat’s chances.

And for a guy that doesn’t perform well on his travels, Poonsawat looked like Michael Palin at times in the second half of the fight. Hosono settled down quicker, before Poonsawat found his on-rushing rage button and relentlessly charged at the Japanese contender.

As the fight dragged on, it looked like Poonsawat would ease to a competitive unanimous decision, especially with him gaining momentum in the latter rounds. But it wasn’t too be, as Hosono staged a two round fightback to square up on my card.

Poonsawat didn’t gas, Hosono got the better of the thrilling action in the last two rounds. It was not something that would be in the boxing manual, but it was as entertaining as anything I’ve seen this year, which is hardly an award to put on the mantelpiece.

Hosono might get a rematch, but I hope he doesn’t. There are bigger fish to fry in Poonsawat’s case, and he should make the most of his golden opportunity and cash in while he can. I’m not saying that he’ll drop his title soon, but he’ll struggle when he comes up against an opponent with a jab.

Mundine was fighting a mid-level light middleweight (being polite), in Robert Medley, and although Mundine didn’t win every round, Medley’s performance hardly merited more than three.

This means nothing, zilch. Mundine keeps ducking his Australian counterpart Daniel Geale for months to come, and will now fight the winner of Australia’s contender series Garth Wood (7-1, 3 KOs).