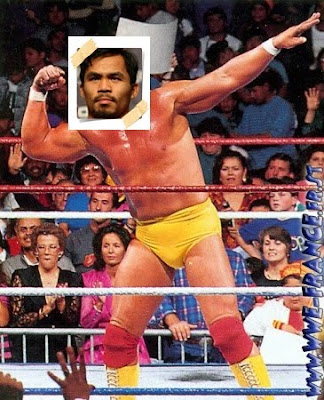 Manny Pacquiao has many smart fans who know and understand the sport of boxing.

If you’re one of those, this article isn’t about you…go take a walk or make yourself a cup of tea.

I want to talk about the large wave of Pacquiao fans who aren’t very bright and seemingly don’t know much of anything when it comes to the sport.

Manny Pacquiao has generated a huge wave of interest among Filipinos, Filipino-Americans and Asians in general. That same wave has picked up some MMA followers and a few casual fans on the way before crashing right into the mainstream of boxing like a gigantic logic-defying Tsunami.

The boxing landscape, in its wake, has been devastated.

(continued)
I haven’t seen such a devoted and tenacious group of blissfully ignorant true believers since legions of 10 year olds dedicated themselves to Hulkamania in the 80’s. But, unfortunately, the Pacquiao version of idolatry far exceeds Hulk Hogan’s innocuous message of “Saying your prayers and taking your vitamins.”

Pacquiao’s fans have grouped together to alter the reality of the current boxing media and have twisted it to fit their own needs. This is not necessarily a bad thing…until you actually see the contributions they’ve made to the discourse.

Any poll about Pacquiao placed on a boxing website will immediately be flooded by a block of fans organized by any number of Pacquiao rallying sites. The end result of any poll is predictable: Manny is right and Manny is the best. Take into consideration a recent long-range poll created to get the boxing public’s consensus opinion as to who the greatest fighters of all time were. Manny Pacquiao, by a wide margin, placed number 2 behind Muhammad Ali, but well ahead of Sugar Ray Robinson, Henry Armstrong, and all of the other greats. Pacquiao may be an outstanding fighter, but he is NOT the second best of all-time. Basically, the ballot stuffing of Pacquiao true believers ruined an otherwise novel and interesting survey.

Another example is a recent LA Times poll which asked about who is to blame for the collapse of the Mayweather-Pacquiao bout. Predictably, 91% of the respondents blamed Mayweather and/or his representatives. Based on my experience and just general common sense, this poll in no way reflects the general consensus of hardcore and casual fans. It is the result of links to the poll placed on Pacquiao-friendly sites and forums in an attempt to rally the troops to flood the survey.

On the surface, you may say “So what? Who cares about some internet polls?” Well, they are a public representation of the sport, the face of boxing to the “legit” media and many casual fans. So, essentially, the true fans of the sport aren’t being properly represented and media attention is being skewed by the whims of a vocal, organized but vastly minority opinion.

If the polls were the only problem, things wouldn’t be so bad. However, the rabid Pacquiao fan base has set their eyes on other areas of the internet, essentially attacking any article and writer who dares to say anything even marginally critical about their hero.

Editor emails and comment sections are flooded by organized groups of Pac Fans, rallied by the Pacquiao-friendly sites to blast these websites, humiliate the authors and silence all dissenting points of view. They are focused, aggressive and persistent…and anyone who has served in some sort of editorial capacity for a site that finds itself targeted can attest to the fact that some of the attacks go far beyond general hate mail from true fans. Death threats, hacking attempts and organized efforts to discredit writers are not out of the ordinary…not to mention comment sections being bombarded with hateful and often racist comments.

Criticism comes with the territory for writers, but these attacks often cross the line and border on harassment. Once you find yourself on the Pacquiao fan hit list, be prepared to be hounded and attacked whenever you dare to write about Pacquiao being anything less than a Saintly Warrior.

It’s a great temptation for editors to completely avoid negative Pacquiao pieces for the reason I stated above. It’s just too much of a hassle to have your site bombarded with thousands of hateful comments and calls of boycott.

The easier way out has been found by some publications: Just print glowingly positive pieces about Manny and pander your way to thousands of cheap pageviews.

Websites like The Examiner and Boxing Confidential have become Pacquiao Fan Sites with zero critical articles regarding the Pinoy hero to such a degree that one wonders whether they will simply fade away once Pacquiao decides to retire. Sites like these have allowed themselves to become breeding grounds and staging points for pro-Pacquiao propaganda and organized attempts to silence opposing viewpoints.

The recent initiative to boycott Floyd Mayweather fights is one example of such organized activities. Another, more recent example, is their attempt to have Teddy Atlas fired from ESPN for his statements on the season opener of Friday Night Fights on January 8th.

Atlas, one of the sport’s true straight-shooters and advocates for boxing reform, talked about an alleged email sent by Team Pacquiao to Team Mayweather that inquired about the penalties for a dirty blood test and if a dirty test could be kept silent “for the good of boxing.”

Despite the fact that this story had already been published in the NY Daily News several weeks earlier, the Pacquiao true believers went after Atlas and called for his head. Everywhere complaints could be made, they were. To ESPN’s credit, they haven’t acted on the pressure, but whether they will lean on him to issue an apology is still up in the air.

Advertisers don’t look at the demo group of those issuing complaints and don’t care about how the campaign was organized…They just see thousands of threats to boycott their product if things aren’t changed. Without advertising dollars, there can be no real boxing media.

Again, none of this pertains to the smart fans who also happen to follow and admire Manny Pacquiao. They can’t help that the Pacquiao name generates such rabidly brainless activists. As a matter of fact, I know of several Pacquiao fans who have begun to turn on him just based on his fan base alone.

So, what can be done about this wave of Pacquiao crusaders bent on silencing all opposing viewpoints?

Not much. But what we should do is let it be known that this group is a small, albeit vocal, minority of the boxing public and that many are simply Pacquiao fans, not even very knowledgeable about the sport at all. They are misinformed by websites that pander to what they want to hear and refuse to accept any opposing view as legitimate. We can also let it be known that sites such as The Examiner and Boxing Confidential are not to be taken seriously as true sources of information.

Other than that, we can just ride out the wave and hope that there’s still some beach front property intact after the waters settle.