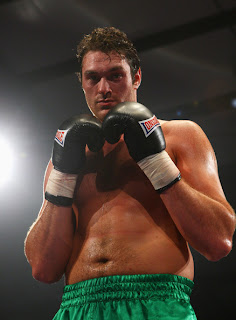 According to Fury’s trainer, Brian Hughes, Fury was supposed to fight on a show in America last week, but as a result of visa issues, the plans had to be re-mapped.

“Mick Hennessey has lined-up two fights for him, one in Atlantic City on 27 February and the other in Vegas on March 12.”

Fury recently made a mockery of himself in the British media, issuing a £10,000 reward for any domestic heavyweight who could knock him down in sparring. This immediately triggered a response from Derek Chisora, who’s without an opponent for February 13 card after BBBofC champion Danny Williams pulled out with a viral infection.

Chisora stepped-up to the mark and challenged Fury to a 10-rounder on February 13, but there has since been no reply from Team Fury. I have high hopes for Chisora and would take him over Fury any day.

Be prepared for out-of-place comments and cheap remarks, as Fury is the king of The BTBC’s ‘Nigga Please’ award. He’s also mildly amusing, for the fact he’s a little out of shape and showboating against tomato cans. Don’t expect him to face a challenging opponent, he’ll probably stop two durable punchbags.