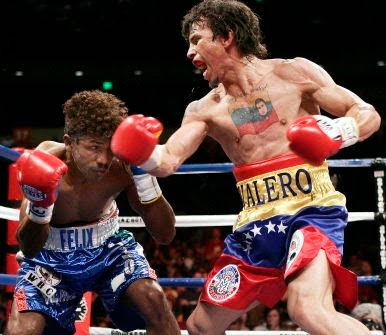 As Edwin Valero prepares for the biggest challenge of his career next Saturday at the Monterry Arena against Antonio DeMarco, The BTBC looks at the recent rise in Venezuelan fighters on the world scene.

*          *          *
With the population of 26 million, Venezuela has recently produced many fighters that have made the jump from backstreet fighting to the world scene. With no real boxing background, Venezuela’s recent rise has simply come out of nowhere.
Three-time world flyweight champion, Beutilo Gonzalez (77-12-4, 52 KO), is probably the most notable Venezuelan figure that has entered the sweet science. In 1978, Gonzalez defeated Guty Espadas by majority decision to capture the WBA title before defending against Martin Vargas later in the year. Two thrillers against Shoji Oguma followed, the first a draw and the second a late knockout, the Venezuelan dropped his title to Luis Ibarra by unanimous decision.
But, bar Gonzalez, Venezuela have struggled to recycle talent from their nation. That’s until now.
Edwin Valero (26-0, 26 KO) is the leader of the revitalised revolution. With his record-breaking stats and raw power, the knockout machine has steamrolled through his first twenty-six opponents as he became a two-weight world champion with a second round pummelling of Antonio Pitalua to fill the WBC lightweight vacancy.
Valero has become a sensation for casual fans, as he’s been hyped up as the monster he is. But he’s yet to have a ‘real’ challenge and Antonio DeMarco is hardly a top 5 fighter yet. Valero will get far just based on his power; anything else he adds to his game is an added bonus. With Juan Manuel Marquez moving up to 140 pounds to face Amir Khan in May, the vacuum at the top needs to be filled, possibly by Valero.
The 28 year-old went eighteen bouts scoring first round stoppages before a brave Genaro Trazancos survived for an extra minute and a half. Valero’s next opponent was Vicente Mosquera, who held the WBA version of the super featherweight championship at the time. The first three rounds were evenly fought with both fighters touching down once. Valero outlasted his opponent, taking him out in the tenth. “Dinamita” racked up four simple defences before an argument with WBA president Gilberto Mendoza gave him enough incentive to move up to lightweight.
He was thrown straight into the limelight at 135, where he knocked down Pitalua three-times in round 2 to win the green belt. In December 2009, Valero was roughed up in his first defence against Hector Velasquez, suffering a cut on the bridge of his nose. Velasquez failed to answer the bell in the seventh round, but Valero might have taken a lot out of that fight.
In the same division as Valero, Miguel Acosta (26-3-2, 20 KO) burst onto the world stage with a stunning upset of Urbano Antillon in a back and forth thriller.
In 2002, Acosta won the Venezuelan super featherweight belt in his tenth pro-fight via majority decision over Santos Rebolledo. But a run of three straight defeats followed, two of them by early stoppage.
Acosta went back to square one and developed a decent run fighting against durable punchbags for five years. In 2007, Acosta faced undefeated Anges Adjaho in a super featherweight eliminator, where Acosta was floored twice late on in the fight. But the Venezuelan finished on his feet to score his first upset victory on the second-tier stage with a hotly disputed split decision victory.
Drafted in as a stepping stone for Antillon, Acosta quickly took the previously unbeaten and undriven Mexican into deep waters, fighting a high paced wild bout. The end came in the ninth, when a barrage of punches from Acosta had Antillon on the canvas for the second time in the round. Acosta should get a title-shot at WBA titlist Paulus Moses this year.
Another Colombian that should get a title-shot in 2010 is Nehomar Cermeno (19-0, 11 KO), in the top 5 bantamweights in every respectable rankings. In 2009, Cermeno twice defeated Cristian Mijares by decision in a breakthrough year for the mandatory challenger. He recorded a stoppage victory over Alejandro Valdez in December to force WBA titleholder Anselmo Moreno to give him a shot this year.
Cermeno could face fellow countryman Alexander Munoz (34-3, 27 KO) before his first title campaign. He holds wins over Nobuo Nashiro and Katsushige Kawashima and his three defeats have been in title-shots against Martin Castillo twice and Cristian Mijares controversially.  Another world class fighter out of Venezuela.
Jorge Linares (27-1, 18 KO) is a quality fighter that suffered a fluke defeat to Juan Carlos Salgado in seventy-three seconds. Light welterweight Patrick Lopez (18-2, 11 KO) now fights out of Londonderry, New Hampshire, and has already one win under his belt for this year with a shutout eight-round decision victory over someone named John Brown.
As eastern Asia countries such as Japan, Thailand and Philippines take all the praise and touted as the next ‘Mexico’ or ‘Puerto Rico’, Venezuela quietly climb themselves up the ranks. With the media predicting big years for Japan and the Philippines, there’s been no mention of Venezuela, maybe as they have no previous background in the sport. If Valero wins on Saturday; Cermeno defeats Valdez; and Acosta, Linares and Munoz keep winning, Venezuela could well find themselves firmly placed on the boxing map in 2010.