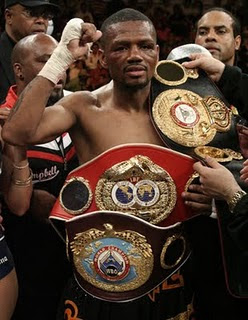 In a junior welterweight contest, the fight will likely be put on the undercard of Amir Khan’s WBA title defence against Juan Manuel Marquez, probably televised on HBO.

The fight is rumoured to take place in Las Vegas, and it’s the true definition of a crossroads bout. The loser will be eliminated from the 140 pound picture, the winner will be quickly thrown in the frame as a fringe-top 10 contender.

Nate Campbell, 38 next month, hasn’t fought since his controversial August fight with Timothy Bradley, where the result was changed to a no contest following referee David Mendoza’s on the night misjudgment.

Victor Ortiz is still very young at 23, but in June suffered a defeat that could end any talented fighter’s career when he quit against Marcos Maidana. He came back in December to stop the experienced Antonio Diaz in seven rounds.

This is a great match-up that has a lot of unanswered questions affecting every predictor’s theory. I can see how people see Ortiz’s hands being raised on May 15, but I can also agree with the fans who believe Campbell will get another victory on his record.

Another good fight added to an already bulky April/May schedule.