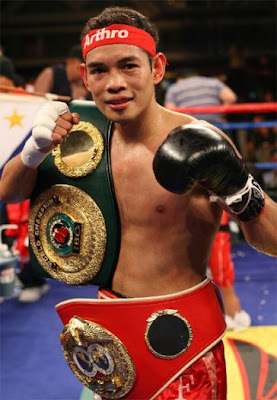 This kid looked like he had it all: power, speed, skill and charisma. He was the type of fighter who could be built into something truly special.

Now, almost 3 years after his shocking title grab, I am firmly off the Donaire bandwagon and it’s all Nonito’s fault.

With just four bouts in about three years and none against his division’s top fighters, Donaire has certainly disappointed all but the most deliriously dedicated fan boys.

The latest disappointment from “The Filipino Flash” began with the selection of his PPV-headlining opponent: Boxrec’s 35th ranked super flyweight and dedicated journeyman, Gerson Guerrero. It takes a pick up full of nerve to place Guerrero alongside Donaire on a pay per view main event, especially after Nonito has taken a 3 year working vacation.

Then, to make matters worse, Guerrero failed a pre-fight eye exam and had to pull out. Manuel Vargas was named sacrificial lamb in Guerrero’s place. Vargas is the world’s ninth ranked minimumweight last seen getting beat by 105 lb. Donnie Nietes.

For those unfamiliar with the weight classes, minimumweight is a full three divisions below Donaire’s super flyweight division. So, essentially, Saturday we’ll see the equivalent of Shane Mosley fighting super featherweight Jorge Solis.

Oh yeah, did I mention that Donaire is struggling with his weight and is still about eight pounds over the limit?

One has to wonder why Ring Magazine has stubbornly saved its seat on the bandwagon and insists on placing him in the #6 spot on their pound for pound list, especially when they rate him seventh in his own division. (By the way, the more accurate and reasonable rankings of The BTBC place Donaire #11 at 115 lbs., but that’s a story for another day.)

Until something changes, this writer’s official statement to Nonito Donaire is short and simple: Get back to me, son, when you’re ready to take this sport seriously.