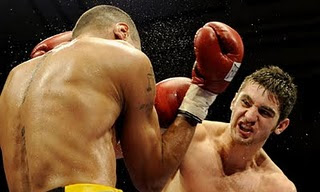 Cleverly boxed on the outside, pounding Brancalion with his trademark body work and left hooks. He started mixing things up in the second part of the fight by destroying Brancalion at will with his straight right hand that landed frequently in the final two rounds. Brancalion (32-8-2, 8 KO) went down just before the bell in the fourth, and as he was really struggling in the fifth as he was getting tagged repeatedly before the fight was stopped.

Cleverly dominated the Italian and possesses a skill-set that allows him to go further than European level. It seems that the BTBC members have done a brilliant choice choosing a very talented fighter to represent them at 175 pounds.

Another House Fighter was on the undercard in the shape of James DeGale (6-0, 4 KO). DeGale flattened an over-matched Matthew Barr in the second round with three knockdowns as he won in his first fight in his hometown.

Heavyweight Derek Chisora (12-0, 7 KO) also made a massive statement to all domestic heavyweights with a second round knockout of infamous Carl Baker (9-5, 6 KO).