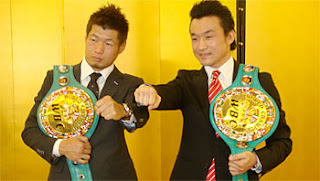 Teiken Promotions, Hasegawa’s handlers, have announced that this fight is slated for April 30, and even though the WBO belt held by Montiel means nothing in Japan, it will be an unification fight as Hasegawa holds the WBC strap. They also report that Toshiaki Nishioka (pictured with Hasegawa) will defend his junior featherweight title on the same bill.

Before hardcore bantamweight fans, yes all 42 of you, jump out of your seats, no word has come out of Top Rank yet. We all know that Arum is holding out for a fight that nobody wants to see, Montiel vs. Eric Morel, so maybe this deal isn’t all done and dusted yet.

Again, it’s Top Rank that buckles in negotiations, and the spin is being placed right now. Eric Morel is apparently Montiel’s mandatory all of a sudden, ‘a must made fight’. Team Montiel are looking to fight Morel on another Latin Fury PPV or Cotto-Foreman PPV in the future.

It’s a fight that makes no sense for promoters. Hasegawa is nothing in Mexico, Montiel is nothing in Japan, the gate isn’t going to break under the enormous surge of people going to watch the fight in those nations. Still, boxing forums such as The BTBC and YouTube communities will be ecstatic if this fight gets made.

This is one of the fights I would love to see happen now, not some stupid hype with tune-ups that could potentially be banana skins. Why wait? What’s Eric Morel going to do to Montiel’s legacy that Hasegawa can’t? Come on Bob Arum, Team Montiel and Fernando himself, let’s get this fight on!