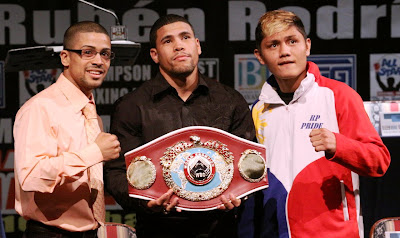 As 19-year old Filipino phenom and former world titlist, Marvin Sonsona, prepares to clash with the son of a Puerto Rican legend, Wilfredo Vazquez Jr., this Saturday, all old school boxing traditionalists have to be sporting a satisfied grin.

These days, the boxing purist is being outsourced to parts unknown and in his place is a generation of fans that take record-padding and boxing politics for granted as part of the sport.

The new breed of fan will never understand how, in the old days, hotshot prospects actually fought one another on the way up, forging their skills until bursting onto the world stage as a professional, battle-hardened fighting machine.

Nowadays, a prospect will be spoon fed until a mega-payday and title shot against some paper champion comes his way. Then, and only then, will the world see if the young star truly has what it takes to be a world class fighter. That’s why we have guys like Andre Berto and Nonito Donaire sporting two and three year title reigns, respectively, without having faced more than one world-class challenger apiece.

Back in the day, the pretenders were weeded out long before they were awarded “World Champion” status.

Fights like Sonsona-Vazquez, where both young fighters have a ton to lose, just don’t happen all that much anymore. Lest we forget, though, that this is 2010, the contest is for the vacant WBO super bantamweight title. So, yeah, a bogus paper title is on the line. But, more importantly, this is a dangerous bout between two young, talented fighters just starting to realize their potentials.

The younger Sonsona has actually faced the better level of competition overall, but Vazquez’s pedigree and class can’t be discounted. A win by either fighter will not be a surprise.

On Saturday night, we won’t be seeing two jaded pros nullifying each other’s strengths while looking to stay safe and marketable; We’ll be seeing two rising stars fighting their hearts out to get to the very top.

Sonsona-Vazquez will reveal a lot. We’re going to see the world class birth of one of these young fighters or, maybe, one will be exposed to the world as a pretender.

Another possibility is that both young men, win or lose, will emerge as better fighters, with battle-forged experience to match their natural abilities.