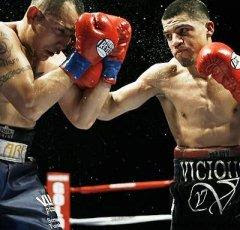 The questions and doubts remain around Victor Ortiz (26-2-1, 21 KO) after his performance on the season debut of Golden Boy Promotions’ “Fight Night Club”. After nine tentative rounds, Ortiz finished Hector Alatorre (16-9, 5 KO) in the tenth round of their main event contest.

Even though Ring Magazine contributor and Fight Night commentator Doug Fischer hyped up the performance as impressive and mature., the victory hardly impressed me. Hector Alatorre is as good as his record suggests and has lost nine of his last eleven bouts.

What I don’t understand is why did they bother go through with the fight? Ortiz earned nothing in the fight, not even rounds, as he met no resistance from his opponent. Alatorre wasn’t durable, Ortiz simply didn’t press enough to take him out as he’d been ordered to ‘get some rounds under your belt’. But it makes no sense. At least give him an opponent that concentrated on the offensive aspect of the game, not only the defence.

Alatorre is about as good as the fighters tonight on Prizefighter. Ortiz has been in the ring and battered many better opponents than Alatorre. In my opinion, Ortiz has gained nothing from last night’s fight. They’ve just given Nate Campbell a fresh tape for the Galaxxy Warrior to dissect and prepare himself for the Ortiz fight.