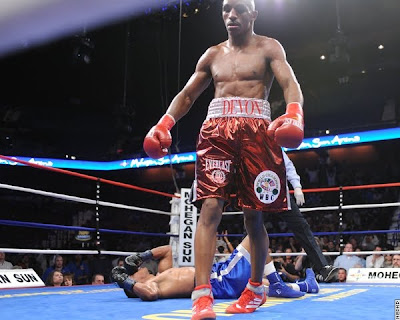 Alexander fought at an even pace throughout, mixing tempo and boxing on the outside with a swift jab while occasionally stepping in to throw a sharp counter at the aggressive Urango.

The end of the bout came in the eight as Alexander caught his opponent with a huge right hand uppercut that sent Urango to the canvas.

The IBF champ never recovered from that shot and was soon back on the canvas a few seconds later, forcing referee Benjy Esteves but to call an end to the bout.

After the fight, Zab Judah tried to interrupt Alexander’s post fight interview, only to be silenced by Alexander’s assertion that Judah was “past tense.”

Guerrro tried to fight back at various parts of the bout, but reigning champ Darchinyan was just too much for the Mexican challenger and won via wide Unanimous Decision with scores of 120-108, 118-110, and 117-111.

To most observers, Angulo seemed to be solidly ahead as he controlled most of the action from the fourth round on, but the judges thought differently with scores of 116-111, 116-111 and 114-113 for the undefeated Australian lightweight.

Camechis seemed hurt with every solid punch landed by Alvarez and was eventually taken out in the third.

After the bout, Alvarez somewhat confirmed that Matthew Hatton would be his next opponent, on the Mayweather-Mosley pay per view, May 1st.