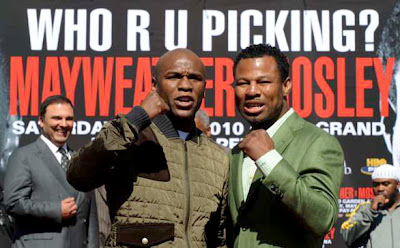 Filipino journalist and commentator, Chino Trinidad, has found himself at the center of a manufactured  controversy surrounding claims that Floyd Mayweather’s publicist, Kelly Swanson, intentionally snubbed the Filipino media during the Los Angeles portion of the Mayweather-Mosley publicity tour.

Trinidad alleges that he and another Filipino journalist were directly told by Swanson that the Philippine media was essentially banned from accessing Maweather at the press conference.

Of course, some dim-witted bomb throwers were bound to latch on to the issue and milk it for some cheap publicity. At the expense of any sense of fair play or journalistic ethics, a Pacquiao fan boy at The Examiner immediately pounded fingers on keyboard and produced a poorly thought-out, incendiary article aimed at  taking dig number 1 million at  Mayweather.

Knowing the writer in question’s work (a writer who once threatened to stab me in a Twitter disagreement), I’m sure the article was only designed to bring traffic his way and ingratiate himself to a Pacquiao inner circle that he so desperately wants to be part of. However, if you have any sort of journalistic integrity, you simply can’t just blindly lob accusations of racism without being willing to hear both sides of the issue.

Kelly Swanson, speaking to Paula Duffy (also of The Examiner), has denied the accusations of racial bias and said that her denial of access to Trinidad had to do with the fact that Trinidad and the other reporter arrived late to the press conference and had informed her that they wanted to speak to Mayweather about Manny Pacquiao and the drug testing issue, two topics that were off limits for all media.

From the Paula Duffy article:

Swanson remembers the two journalists and she said that, “They arrived after other TV crews were gone. I told them that Floyd was not going to answer questions related to Manny Pacquiao and drug testing.” According to Ms. Swanson, that is what the media members were interested to discuss with her client.

She continued, ” I at no time refused them the opportunity to speak with Floyd Mayweather. They were welcome to go down to where he was with the fans and wait to see if he would give them an interview. But he would have told them what he has told many other media members this week about keeping to the topic at hand.”

Even if Mayweather had chosen to exclude Trinidad, exclusively, he very well may have had reason to do so.

Chino Trinidad has been a long time Mayweather critic and a hanger-on in the ever-growing Pacquiao cadre of star-struck journalists and yes men looking to social climb their ways into Manny’s good graces.

This is what Trinidad had to say about Mayweather  in a recent video interview:

“That guy punches like a Power Puff girl…. (Floyd) You’re dead…Who’s running scared? Floyd is…Floyd Mayweather is in the trash can.”

So, you reap what you sow in this business. I know that, after being critical of Pacquiao over recent months, I’d never get access to a no-limits interview with Manny. Trinidad should also understand that nobody has to talk to you if they feel that you’re just there to ambush them.

If the Mayweather camp did single out a certain racial group for exclusion, it’s simply horrible and worthy of condemnation. But it’s hard to believe that Swanson, an experienced publicist, would be so blatant with something as incendiary as what is being claimed.

It’s even harder to believe the characters making these claims.