Continuing with The Boxing Tribune’s preview of Pacquiao-Clottey, Dafydd Thomas writes about how he hopes Bob Arum and Bruce Trampler’s horrific choice of undercard fights will come back to haunt them.

In case you’ve been in hibernation for over a year, we’re gradually recovering from a recession that has affected everyone, no matter what their financial status reads. Many are carefully counting their pesos, only spending on necessary goods while saving for another rainy day.

For fight fans, an 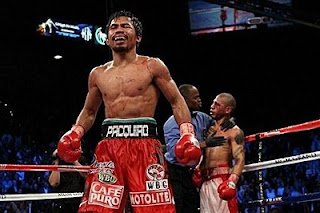 y fight involving the pound-4-pound king is a necessity, and on Saturday, 2010’s maiden HBO PPV will be aired as “The Event”, which will cost $50 or even $60 for the HD broadcast. As you all know, Manny Pacquiao headlines against Joshua Clottey, in one of the highest gross tune-up fight in the history of the sport.

The fight isn’t as competitive as some will drive it up to be. Pacquiao is obviously the clear favourite, and to bet against him you have to be out of the loop. Clottey, also a Top Rank fighter, is earning a nice cheque for providing enough resilience to carry Pacquiao some rounds before folding under the pressure from the Filipino great.

They have one common opponent, which is Miguel Cotto. Cotto defeated Clottey via hotly disputed split decision (a fight that we’ll be investigating later on in the week), while Pacquiao made Cotto run… run… run en route to a twelfth round technical knockout victory. Of course, styles make fights is rule of thumb in predicting a contest. But this isn’t one. Clottey hasn’t got the bottle to win.

Back to the matter at hand. Normally, the strength of the main event will carry the PPV numbers, regardless of whoever’s fighting on the undercard. But when you’ve got a bigger headline act fighting just over a month after, with an evenly matched dance partner, for the same amount of dollars, plus a stronger undercard, there should only be one thought in your mind if you don’t have the finances. No, not going down to the local bookmakers, but save up for the stronger show.

I’m not trying to be a financial advisor, but that’s logic. You’d think that Arum and Trampler would spot the weakness and strengthen it somewhat. But when has Arum put on a decent undercard? He’s always been one for cutting costs and maximizing profits, showing ‘The Son of the Legend’ who needed banned substances to help him against Troy Rowland. But this undercard has crossed the line.

We have a “Contender” loser, two shot to smithereens fighters, an Irishman that’s not once looked like a future successor to Kelly Pavlik, and a guy called Michael. That’s what you’re paying for.

It could’ve been so different. The despicable Antonio Margarito was scheduled to make his return against Carson Jones, but he couldn’t even get past the high standards of Texas officials. To think that he would’ve been allowed to return on one of the biggest events of the year would’ve been humiliating for the sport.

Boxing has the sporting world’s attention for this week, a chance to build a stronger fanbase for the future. For hardcore boxing fans, the sweet science is like a drug. We seem incapable of disconnecting from the sport. The loyal fan has given up hope of a change in the drab state of affairs. If celebrity bouts, worthless pay-per-views and disagreement over some random drug test dominate the sport, so be it. It’s like we don’t expect a change, so we won’t do anything about it.

That’s why Arum puts on these ghastly cards. Most of the PPV’s brainwashed buyers will be gullible enough to believe that this is competitive. The others just buy it for the sake of boxing. And that’s what will keep Arum going for the rest of the year. Pacquiao is far better than Clottey. Basically, bet the farm on Pacquiao. If you buy, it encourages promoters to put on more garbage undercards for your enjoyment.

The first televised fight is John Duddy vs. Michael Medina in a 10-round middleweight contest. Honestly, does anybody give a fuck? No seriously now, does anybody desperately want to know the result of a mildly competitive and dull fight that makes no difference what-so-ever to the state of the division? Medina has been competitive against Martirosyan in 2008, and on the basis of a fight that happened a while ago, I choose Medina by close decision. But frankly, I don’t care.

Following the middleweight blood-bath is Alfonso Gomez vs. Jose Luis Castillo in another fourth-tier clash that turns no heads. Castillo is shot. Gomez is shit. It’s a complete mystery to me how Gomez is ranked #11 by Boxrec, while Castillo is more accurately ranked at #30. Even a shot Castillo should have enough pop to keep the slicker Gomez at bay, Castillo should take it by competitive decision. Again, it’s a crap undercard fight for one of the biggest events of the year. It’s an interesting fight, but not one you’d want on a 700,000 buy pay-per-view.

Again referring to Boxrec, the last televised undercard fight is rated at five stars. Humberto Soto vs. David Diaz is a decent fight, but does it deserve the same recognition as Pavlik-Martinez or Abraham-Dirrell? Piss or get off the pot. It’s not even competitive. Soto is on a steam-rolling streak, while Diaz is shot. It shouldn’t be a contest. Soto should stop Diaz late on. 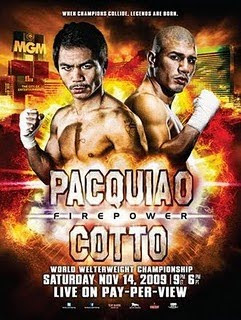 t the undercard fights, they’re all decent fights but are unworthy of this kind of stage to perform on. On November 14 2009, I thought I had witnessed the worst ever undercard for a big event. I was wrong. I seriously think this tops it. At least there was a title on the line on Firepower, even if Julio Cesar Chavez Jr. helped me catch up on sleep (no joke, he seriously did).

This time though, it might not pay off. Pacquiao-Clottey is nowhere near as well marketed as Pacquiao-Cotto, and not even close in fight interest. Pacquiao-Cotto didn’t need a strong undercard to sell, but I feel that this fight does need an extra fight. And I hope, for boxing’s sake, that the pay-per-view numbers aren’t as high.