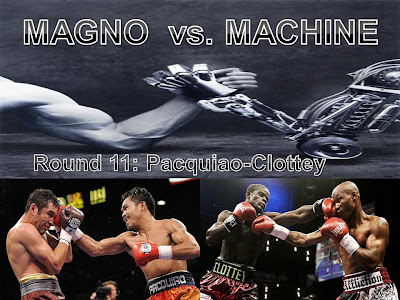 We’ve reached the penultimate round of Paul Magno’s long endurance-test battle with the multi-functional predicting machine that is Title Bout Championship Boxing 2.5 no-less. Both are level with only a KO separating them as we reach the final two hurdles. Can Magno level up the KO count this week? Or will a challenger go for broke in a desperate dash towards the finish line?

Magno: Walk in the park for Pacquiao. Clottey is the exact opposite type of fighter needed to beat Manny. He’s slow-footed, passive and robotic. Manny will dart in, dart out and be well out of range before Clottey can even put his hands down from his defensive position. Clottey will defend as long as Manny throws, but Manny won’t tire. For Clottey to win, he’ll have to change his style and mindset completely and develop skills that he has never shown before in his career. I’d be surprised if he manages to win even two rounds. Clottey is a good fighter, just all wrong for Manny. Easy win via TKO or RTD around the 10th as Clottey’s inexperienced corner overreacts and stops the bout amidst the chaos generated by 45 thousand screaming Pacquiao fans.

Machine: The Machine has thought about the possibilities in this fight long and hard, balancing out both fighters’ chances of winning the fight. The Machine agrees with the bookmakers, Pacquiao is favourite.

In the 100 simulations, Pacquiao was victorious in most by eleventh round technical knockout. Clottey however won over a quarter of the fights, which makes you wonder if the Machine was onto something.

The only advantage Clottey has is defense and dimensions, which is inconclusive if he crouches into a shell defense. The speed, power and tactics lie in Pacquiao’s corner, which makes it hard to see where a Clottey victory can come from.