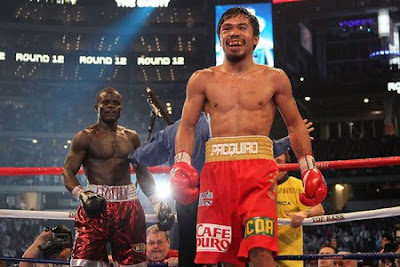 In front of over 50,000 boxing fans at the impressive Cowboys Stadium in Dallas and the thousands watching on HBO PPV, Manny Pacquiao’s first defense of his WBO welterweight title against Joshua Clottey fell short of its label as ‘The Event.’

‘The Grand Master’ was successful in landing his trademark left uppercuts and his improved right hand, but they were rare spurts in rounds dominated by Pacquiao flicking out straight punches. As the fight gradually increased in intensity, it was all due to Pacquiao and his crowd-pleasing blitzes, not Clottey’s statue stance.

Similar to the Cotto bout, Clottey frustratingly waited for Pacquiao to stop punching before throwing his own leather. He kept his ears warm all night with a tight guard that was rarely broken by Pacquiao, but that didn’t matter to either fighter. Pacquiao was pleased with how easy his night’s work had turned out while Clottey was content with going the distance.

Clottey simply didn’t have the fortitude to make the fight a competitive one. I gave Clottey the second round, and frankly, it was the only round I even considered giving the Ghanaian. It was a landslide, and the stats also displayed how easy it was for Pacquiao. The Filipino threw over 1200 punches, connecting with 20% en route to an emphatic unanimous decision. 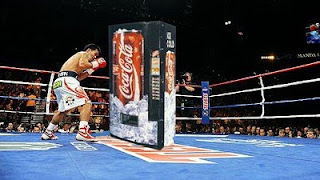 It seemed that Clottey wasn’t really that bothered about winning. He was quoted before the fight saying that he would wait until ‘Pacquiao punches himself out’. That backfired miserably.

The main event was only part of the problem. The so-called competitive undercard that was badly out of place in a fight labelled ‘The Event’, was at times cringeworthy.

The potential blood-bath middleweight scrap between John Duddy and Michael Medina was average. It was watchable, even though it had no importance to the division. Duddy won by scores of 96-93 across the board, The BTBC also scored it 96-93. For me, Duddy had improved slightly since his previous fights, but he’s still a county mile away from being ready to challenge anyone from the top 25.

My relentless negativity continues, as Alfonso Gomez retired Jose Luis Castillo in the fifth round. Castillo looked awful. He had nothing on his punches, he was slower than Gomez, and he was out-thrown 3 to 1. I read somewhere that Castillo looked worse than he did against Sebastian Lujan, and I agree.

Castillo officially announced his retirement from the sport after the fight.

The chief-support for the PPV card was Humberto Soto vs. David Diaz for Diaz’s old WBC lightweight trinket, vacated by Edwin Valero. It’s hard to really gauge how good a performance Soto gave, as Diaz is no more than second-tier and he’s very limited. Soto is a poor man’s Juan Manuel Marquez, he’s more dynamic but less skillful. Soto knocked Diaz in the opening and closing rounds. During the fight, Diaz attempted to pressurize Soto, but he was taking counters for the majority of the fight. The judges’ scores were 117-109, 117-109 and 115-111. The BTBC scored it 116-110.

The undercard had no drama, no excitement, not even one thrilling moment. Even Soto’s knockdowns didn’t get the blood pumping.

However, the most bizarre moment came when Jim Lampley’s started to play cops and robbers with Max Kellerman at the end of round 8:

The highlight of the night? No doubt about it, the stadium. Nothing but praise for Arum and Jones for making a bold move away from Vegas. Hopefully, a few more fights can be staged in different stadia across the States.