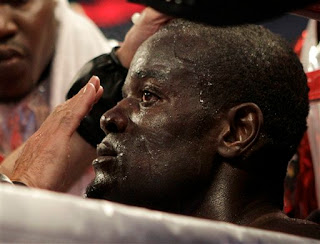 Post Pacquiao-Clottey rout, the internet has been abuzz with Joshua Clottey critics and expressions of disgust at the effort he put forth at Cowboys Stadium on Saturday.

As someone who was crying “mismatch” from the moment the bout was first announced, I can’t say that I was surprised nor will I feign modesty on the issue. This was a horrible stylistic mismatch featuring one guy who is a buzzsaw of activity in the ring against another who practically has to be cattle-prodded to throw punches.

Most experts and people “in the know” had to see the writing on the wall. Those who didn’t, were either optimistically hiding their head in the sand in hopes of a great fight or, well, not so expert after all.

While it’s easy to pick on Clottey for his non-performance, you have to accept the fact that nothing else was to be expected. Clottey is well-known for crawling into a shell for as long as he has an active opponent in front of him. He’s always been a catcher more than a pitcher and it just wasn’t realistic to expect him to completely turn his mindset around and suddenly become anything else.

Clottey’s psychology and game plan was not exactly a secret…He flat-out told us what to expect:

“My body can take it. When he throws punches at me I will block him and that will confuse him…(Pacquiao will throw 30 punches, I will throw 4) and the four will connect while I will block most of the 30. I will wear him down for sure.”- Joshua Clottey to Boxingscene.com

The fact that Clottey would keep his hands up the entire time and look to negate and wait Pacquiao out was the worst kept secret in boxing and it was something that the organizers of the match-up surely had to be aware of as well.

So, if Clottey was just being Clottey on Saturday night, who deserves the public scorn?

That would be one Mr. Bob Arum, Top Rank boss man and bionic BS machine. It was Arum who purposely put this entire card together and peddled it as “The Event.” It was Arum who took a small-venue card and stuck it in a state of the art megaplex. And it was Arum who essentially delivered a big “F-You” to 51,000 boxing fans who crowded Cowboys Stadium and to those who paid fifty bucks a pop via pay per view to see an entertaining, competitive bout and card.

Don’t blame Joshua Clottey for being Joshua Clottey, blame the one who put him in the position to turn an “Event” into a non-event.

With the world watching and the fans crowding in to see world-class boxing, Arum showed pure disdain for the sport by putting a “Latin Fury” undercard on a big ticket show and by picking a main event opponent for Pacquiao who was sure to disappoint.

Boxing had a chance to shine on Saturday, but instead, it was just another “ho-hum” night with the entire world watching…If you ask me, that’s a lot worse than a defense-minded Joshua Clottey.