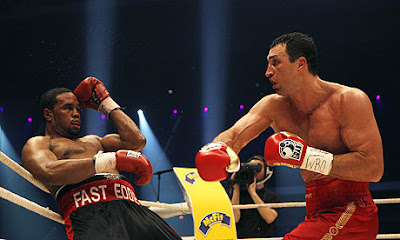 Dusseldorf, Germany- In front of a packed soccer stadium, WBO and IBF heavyweight champion, Wladimir Klitschko (54-3, 48 KOs), did what he does best and gradually dismantled game challenger, Eddie Chambers (35-2, 18KOs).

Chambers came out with energy and a definite plan, but was kept at a distance for almost the entire fight by Klitschko’s trademark long jab.

The first two rounds were close with Chambers using movement and some defiant roughhouse tactics to keep things close. In the first, Chambers lifted Klitschko in a clinch and in the second, he lifted and body slammed the defending champ to the canvas. Klitschko responded by connecting with a one-two combination that nearly dropped the challenger.

In the third, Klitschko firmly established the distance and pace of the bout and, from that point on, it never varied. Chambers did try to dig into Klitschko’s body, the way he did to Alexander Dimitrenko, but he was never able to get close enough, long enough for the body attack to be effective.

Rounds four through eleven were nearly identical with Klitschko controlling the tempo and the distance while Chambers seemed to be just biding his time with survival on his mind. A tear in Chambers’ glove gave the challenger a rest before the tenth and it seemed to energize him, but it was to no avail as the champ re-established the pace before the end of that round.

At the urging of Emanuel Steward, Klitschko came out for the twelfth with fire in his eyes and took the fight to a tired and dejected Chambers.

The end of the bout came via a lead left hook to the temple which immediately put out Chambers’ lights in the corner. Referee Geno Rodriguez waved off the bout at the 2:55 mark of the twelfth.


Key West, Florida- Undefeated Cuban, Odlanier Solis (16-0, 12 KOs), was set to answer Wladimir Klitschko’s impressive performance earlier with a gem of his own. Unfortunately, his opponent, Carl Davis Drummond (26-3, 20 KOs), never really came to fight and ended up turning the bout into a non-event.

Solis looked as impressive as possible, but Drummond plodded along and refused to engage. Drummond ended up quitting in his corner after the third.